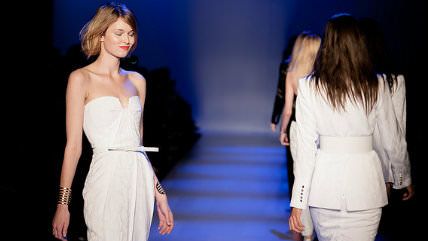 Models who don't meet certain government-imposed weight requirements have been banned from French runways and advertisements, under a new law approved by the French parliament Friday. Modeling agencies and others who employ these models could be fined €75,000 or face six months in prison.

In other words, French law now requires employers to discriminate based on body type.

The rule relies on body mass index (BMI)—a number calculated using a person's weight and height—to determine who is too skinny for the catwalk. Anyone with a BMI under 18 is banned. Health minister Marisol Touraine said the move is part of the country's efforts to stop people from developing eating disorders.

Most of the media has been reporting on the law as a ban on "anorexic" or "ultra-thin" models. But that's a bit of a stretch. While BMI can be useful as a broad guideline for healthy weight/height ratios, it's far from a definitive indicator of fitness or health. The Centers for Disease Control and Prevention, for instance, describes BMI as "a fairly reliable indicator of body fatness for most people" (emphasis mine). Many perfectly fit and visually slim people complain that their BMI places them in the "obese" category, which tends to happen when people are more muscular. Anyone with a BMI of 30 or above is considered obese.

And anyone with a BMI under 18 is considered "underweight." But like the obesity threshold, many people who fall in this "underweight" category both appear and are healthy. I'm one of them. At 5'6″, I tend to weigh between 110 and 115 pounds. At the high end, I am considered to have a healthy and "normal" BMI. Lose four pounds and I'd be banned from modeling in France. And I am hardly what anyone would consider worryingly thin.

This wouldn't just be just a ban on "anorexic" models but a whole lot of healthy women, women who would have to be actively unhealthy to meet the government's weight standard. [Meanwhile, of course, anyone in France who wants to access images of ultra-thin or anorexic models could certainly still do so all over the Internet.]

The measure would also require re-touched photographs used in advertisements to carry a message saying the image was altered and make it illegal to condone "excessive thinness." Any operator of a website "encouraging eating restrictions for a prolonged period of time" would face up to a year in prison and fines of up to €100,000.