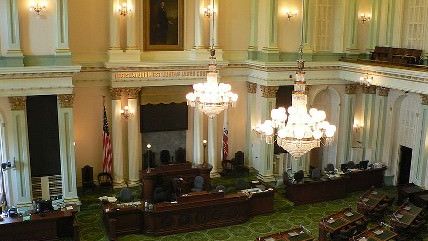 SACRAMENTO — "The dignity of the word, to be sure, consists in this: through the word is accomplished what no other means can accomplish, namely, communication based on reality,"wrote German philosopher Josef Pieper, in his book "Abuse of Language, Abuse of Power."Pieper warned of the modern trend toward sophistry, that is, distorting words to dupe the public.

Pieper would have had a field day in California's Capitol, where the simple word "reform" means something very different than the dictionary definition: "make changes … in order to improve it." This is particularly true when one is talking about California's convoluted tax system, which is routinely the subject of reform discussions.

People from across the political spectrum complain about California's steeply progressive tax structure. Liberals are fine with the rich shouldering the burden, but complain that the capital-gains-based system distorts budgeting because of boom-and-bust cycles. Conservatives argue the top-heavy tax burden chases job creators to other states.

Indeed, the top one percent of income earners pay more than 50 percent of the state's overall revenues, according to the Legislative Analyst's Office. The state's tax structure would top the list of any issues ripe for serious bipartisan deal making. And a recent study makes the issue more pressing.

"We've found that income inequality between the top one percent and bottom 99 percent rose with economic growth and fell with economic slowdowns," according to Autumn Carter, of the reform-oriented California Common Sense. "California has staked the bulk of its annual budget on the one ercent's ability to keep growing its income through taxable income like capital gains. We're actually balancing our state budget on income inequality."

Along comes the "Upward Mobility Act" (SB 8)—a major tax "reform" bill introduced in December by state Sen. Bob Hertzberg, the Van Nuys Democrat with a reform-oriented reputation. Anything Hertzberg promotes garners serious interest, given that he's often mentioned as the next possible Senate leader.

"California has long been known as the land of opportunity, the republic of the future," wrote Hertzberg, USC law professor Edward Kleinbard and economist Laura Tyson, in the Los Angeles Daily News. "Inequality continues to rise – even though California has one of the most progressive tax structures in the nation. Something more is needed." They call for "a new philosophy of governance" and "modernizing our tax system" to boost upward mobility.

As the legislation explains, California's $2 trillion economy has shifted dramatically since the 1950s and 1960s, when the framework for the current tax system was put in place. Back then, the economy was heavily based on manufacturing and agriculture. Today, the bill explains, information and services make up 80 percent of the economy.

A typical "reform" idea is to apply sales tax to services and simultaneously reduce corporate and personal-income taxes. But that's not what's going on here. SB 8 would do the first part – apply sales taxes to legal, real estate, accounting, political consulting, yoga classes and most other services (health care, education and smaller businesses are exempt) in exchange for, get this, "evaluating the corporate income tax to determine whether it is meeting its intended purposes" and examining "the impacts of lowering and simplifying the personal income tax while maintaining progressivity."

In other words, we raise taxes now—and talk about lowering them later (with the stated goal of lowering personal income taxes mostly for lower- and middle-income people). Critics aren't sure how burdening service-oriented businesses with new taxes will increase growth and upward mobility.

Hertzberg admits his bill is a work in progress, but his stated goal is to raise $10 billion in state taxes to spend on education, infrastructure and aid to the poor. Any future revenue reduction "would be phased in only when it is clear that new revenues are sufficient to replace any revisions to the personal income tax and corporate tax."

Is this a futuristic plan to increase upward mobility or the oldest idea in Sacramento: Increasing taxes to fund more government spending? "(Hertzberg's) first bill is a huge, historic tax hike," explained columnist George Skelton, who supports it. I disagree with his conclusion, but am glad someone finally is using words based in reality.