Obama: Iran Deal With 'Robust and Intrusive' Inspections 'Our Best Option by Far' 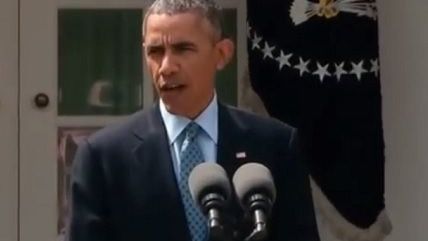 President Obama delivered a 20 minute statement about a "framework" negotiators in Geneva had agreed to for a deal between Iran and the P6 over its nuclear program, hailing it as an "historic understanding with Iran" that was the best option to prevent it from acquiring a nuclear weapon.

Obama took credit for laying the path for diplomacy, saying he had "made clear we were prepared to resolve this issue diplomatically, but only if Iran came to the table at a serious way." When it didn't, the U.S. imposed sanctions that had a "profound impact on the Iranian economy."

"Sanctions alone could not end Iran's nuclear program," Obama said. But "because of our diplomatic efforts the world stood with us." The president pointed to skeptics who argued Iran would cheat, that the U.S. could not verify their compliance, and that the interim deal would fail. "It's succeeded exactly as intended," the president said. "Iran has met all its obligations," with inspections increasing as negotiations continue.

The president called the deal envisioned in the framework a "good deal" based on "many months of tough, principled diplomacy"  that met the "core objectives" of cutting off Iran's "pathways" to a nuclear weapon. Because of a "robust and intrusive" inspection regime, Obama said Iran could also not develop a nuclear weapon covertly ("that is, in secret" he explained).  Sanctions would be lifted piecemeal as Iran closes down facilities, shifts resources, and slows down processing work—some restrictions last 10 years, some 15 and, the president insisted, that intrusive inspection reigme could last "forever." The deal wasn't based on trust, the president said, but "unprecedented verification."

The deal, he said, was the best of three options to keep Iran from developing a nuclear weapon, the others being war and more sanctions, neither of which, the president pointed out, would work.  President Obama insisted U.S. sanctions related to Iran's support of terrorism, human rights abuse, and ballistic missiles systems would remain in place, and that there would continue to be "no daylight" in the security concerns of the U.S. and Israel. Obama said he would call Netanyahu and that U.S. officials would be headed to Israel to strengthen security cooperation later this year.

Directing his comments to the Iranian people, Obama pointed out the country's supreme leader issued a fatwa against nuclear weapons and that the deal on the table was "the best way" for Iran to show that it means it, and an important step to "rejoining the community of nations" and fulfilling the "aspirations" of [whatever rhetoric the president uses here].

The president stressed there would be no agreement on anything until everything was agreed to. Through the end of June, negotiators will work out exactly how the timetables for shifting the nuclear program and the sanctions and how the inspections regime that comes with it will look.

The Iranian foreign minister and the foreign minister of the European Union made a brief statement about the framework earlier today, and the State Department released a fact sheet explaining what the U.S. believes the deal to be.