Why Can't We Call the UVA Case a Hoax?

Evidence of how extreme and irrational "rape culture" dogma has become 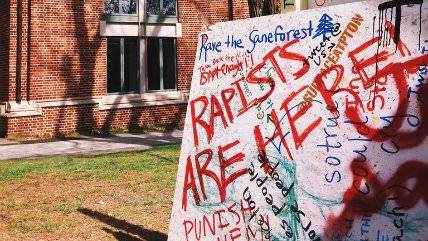 Four months after Rolling Stone magazine published a shocking—and soon discredited—account of a fraternity gang rape at the University of Virginia, the Charlottesville police department has released the results of its investigation into the alleged assault. It comes as no surprise that "no substantive basis" was found for the claim by a student known as "Jackie" that she was raped by seven men at a fraternity party as a UVA freshman in September 2012. What's striking is to what lengths both the police and many in the news media have gone to tiptoe around the obvious fact that the tale was a hoax by a serial liar. This dance of denial suggests that in the current ideological climate, it is nearly impossible to declare any allegation of rape to be definitely false.

At the press conference, Charlottesville Police Chief Timothy J. Longo stressed that the department's conclusion "doesn't mean something terrible didn't happen to Jackie" and that the investigation is not closed but only suspended until new evidence emerges.

It is, of course, nearly impossible to prove a negative. Short of a surveillance tape documenting Jackie's every movement, one cannot know for certain that she was never sexually assaulted at UVA. But the evidence against her is damning. It's not simply that there was no party at Phi Kappa Psi, the fraternity named by Jackie, anywhere near the time when she said she was attacked. It's not simply that her account changed from forced oral sex to vaginal rape and from five assailants to seven, or that her friends saw no sign of her injuries after the alleged assault. What clinches the case is the overwhelming proof that "Drew," Jackie's date who supposedly orchestrated her rape, was Jackie's own invention.

Back in the fall of 2012, Jackie's friends knew "Drew" as "Haven Monahan," an upperclassman who supposedly wanted to date her and with whom she encouraged them to exchange emails and text messages. However, an investigation by The Washington Post and other media last December found that "Haven's" messages were fake; the phone numbers he used were registered to online services that allow texting via the Internet and redirecting calls, while his photo matches a former high school classmate of Jackie's who lives in a different state. No "Haven Monahan" exists on the UVA campus or, apparently, anywhere in the United States (at least outside romance novels). The catfishing scheme seems to have been a ploy to get the attention of a male friend on whom Jackie had a crush—the same friend she called for help after the alleged assault.

Is it possible that someone sexually assaulted Jackie on the night when she claimed to be going out with her fictional suitor? Theoretically, yes. But it's also clear that her credibility is as non-existent as "Haven Monahan."

Moreover, the police investigation has debunked another one of Jackie's claims: that in spring 2014, when she was already an anti-rape activist, some men harassed her in the street off-campus and threw a bottle that hit her face and (improbably) broke. Jackie said that her roommate picked glass out of a cut on her face; but the roommate disputes this and describes the injury as a scrape, likely from a fall. Jackie also said she called her mother immediately after that attack, but phone records show no such call.

Despite all this, Chief Longo wouldn't call Jackie's story a false allegation and even referred to her as "this survivor" (though amending it to the more neutral "or this complaining party").

Meanwhile, in the CNN report on the March 23 press conference, anchor Brooke Baldwin, correspondent Sara Ganim and legal analyst Sunny Hostin were tripping over each other to assert that "we have to be very careful" not to brand Jackie a liar and that "she could have been sexually assaulted." Hostin argued that the idea that Jackie made it all up "flies in the face of statistics," because "only about 2 percent of rapes that are reported are false."

This is a bogus statistic, which Hostin misattributed to the FBI. (According to FBI data, 8 to 9 percent of police reports of sexual assault are dismissed as "unfounded"; the reality of false rape reports is far more complicated, and it's almost impossible to get a reliable estimate.) Even if it were true, it would say nothing about Jackie's specific case. What's more, statistics on false allegations generally refer to police reports or at least formal administrative complaints at a college—neither of which Jackie was willing to file.

CNN never mentioned the evidence that Jackie fabricated "Haven Monahan." Neither did the New York Times, which said only that "the police were unable to track Mr. Monahan down."

Jackie's defenders argue that rape victims often change their stories because their recall is affected by trauma. It is true that memory, not just of traumatic events, can be unreliable; a victim may at various points give somewhat different descriptions of the offender or the attack. It is also true that, as writer Jessica Valenti argues, someone who tells the truth about being raped may lie to cover up embarrassing details (such as going to the rapist's apartment to buy drugs).

None of that, however, requires us to suspend rational judgment and pretend that Jackie's story is anything other than a fabrication. While Jackie is probably more troubled than malevolent, she is not the victim here. If there's a victim, it's Phi Kappa Psi, the fraternity branded a nest of rapists, suspended and targeted for vandalism—as well as UVA Dean Nicole Eramo, whom the Rolling Stone story painted as a callous bureaucrat indifferent to Jackie's plight.

In this case, at least, there were no specific accused men. But the extreme reluctance to close a rape investigation and call a lie a lie bodes ill for wrongly accused individuals, who may find themselves under a cloud of suspicion even after all the facts exonerate them.

Evading the facts does a disservice to Jackie, too. In a sane environment, she would face disciplinary charges and perhaps mandatory counseling. In a climate where saying that a woman is lying about rape is tantamount to "victim-blaming" and "rape culture"—and where some of Jackie's fellow students say that even if her story "wasn't completely true," it helped bring attention to important issues—she is likely to remain mired in self-destructive false victimhood.

For the rest of us, this episode shows how extreme and irrational "rape culture" dogma has become, and how urgent it is to break its hold on public discourse. The current moral panic may be an overreaction to real problems of failure to support victims of sexual violence. But when truth becomes heresy, the pendulum has swung too far, with disastrous consequences for civil rights and basic justice.

This column originally appeared at RealClearPolitics.