What the law actually says is mostly irrelevant in our cultural climate. 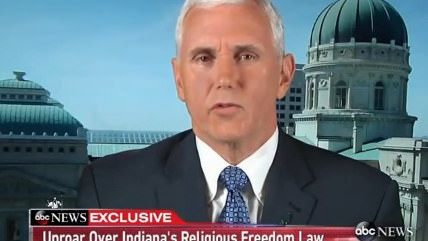 There's absolutely no likelihood that any significant number of Indiana businesses are just waiting for an excuse to discriminate against gay people. The state itself doesn't have sexual orientation on its protected list, though some municipalities do, and yet we aren't being pummeled with stories of discrimination against gay hoosiers. Certainly it happens, and there really is no point in pretending that Indiana's Religious Freedom Restoration Act (RFRA) is not partly inspired by the desire of Christians in certain lines of work to not have to accommodate gay customers. Gay activists have noted that very vocal antigay people were involved in the drafting of the law and attended the signing ceremony.

There is an absurd awkwardness in the whole dance. Gov. Mike Pence simply refused to answer George Stephanopoulos directly when asked whether the law would allow florists to refuse to offer their services for gay weddings (watch here starting around four minutes in), even though that is most certainly the intent of at least somebody who helped craft the legislation.

It's entirely possible that Pence actually doesn't know. That's what's awkward about an RFRA. If somebody claims the right to ignore a law or government regulation due to religious beliefs, then the state is put in the position of having to prove that the law is in the state's interest and is the least restrictive means of doing so. Therefore the courts would actually be deciding on a case-by-case basis what it actually means. If you want to delve into what the RFRA actually does in Indiana that is different from the existing, completely non-controversial until now, federal RFRA, read more here.

Analysts are getting caught up in arguing about the differences between what the RFRAs do, but that's not what matters. I'll go out there and say that the actual wording of Indiana's RFRA is completely irrelevant. The Washington Post has a simple graph that explains why this is all churning out the way it is:

As we can see from the graph, many of these RFRAs passed when gay marriage recognition was an unpopular concept, polling below 40 percent. Now that gay marriage is increasingly popular, this RFRA has become a signals contest in the culture war. Obviously nobody is obligated to engage in any form of discrimination in Indiana, and I would wager that 99.9 percent of Indiana's businesses will not turn away a single person for being gay. But it's all about positioning yourself within this moment we're having. Pence has to pretend the law doesn't protect bigotry against gays because that doesn't poll so well anymore, but can't seem to argue that protecting civil liberties often requires defending bigots or it's not really a civil liberty. The CEO of Apple has to write a big commentary about how discrimination is wrong and bad, and how you should also know that Apple, the company that he works for that sells many, many expensive things to customers, would never do such a thing. The band Wilco just tweeted they were canceling their show in Indianapolis.

Wilco's "signaling" here also stands in as a weird sort of collective punishment. What does anybody who is likely to attend a Wilco concert or any of the businesses with which they are likely to interface have to do with this law? Nothing.

Massive gaming convention Gen Con had initially made a big deal about possibly moving out of state in response to passage of the RFRA, to "deny" the state millions in revenue. But that's confusing the government of the state with the citizens of the state. It's businesses in Indianapolis who actually rake in money from the convention. Gen Con has backed off for now after actually talking to the businesses that they deal with, who of course have absolutely no interest in discriminating against any gay Gen Con attendees.

But they signaled loud and clear. It doesn't actually matter that the RFRA won't really lead to some sort of new dark ages against the gays because culture simply has no interest in going there. The important thing is that people position themselves properly to be seen as good people by their peers.