Say Anything: A Video Memorial for Sen. Harry Reid, the Ultimate Party Hack

A history told through absurd quotes. 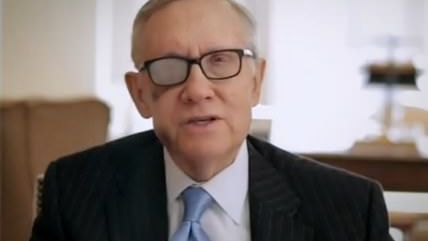 Sen. Harry Reid (D-Nev.) has announced he's cashing in his chips (this is probably not a metaphor) and going home. He's declaring at the age of 75 he will not be running for re-election. He's been in the Senate since 1987 and has led the Democrats since 2007, serving as the majority leader during the Obama administration until his party lost control at the start of 2015. Here's his video announcing his retirement:

Reid will not be leaving the Senate as a man with a reputation for big ideas or for having any sort of charisma whatsoever. No, rather he was known as an expert at fiddling with the levers of power to control the beltway debate and for his willingness to polish even the smelliest of turds served up by his party. That Reid actually wasn't any good at that second part is what has made his career (especially the most recent years) so memorable.

Rather than offering up some staid blathering retrospective, let's let Reid go out being Reid. Here are some highlights (for a given definition of "high") from Reid's own mouth.

First, we cannot possibly start this tour without a visit to Elko, Nevada. Harry Reid's attempt to portray Republicans in 2011 as great, big meanies for wanting to cut government spending backfired when Reid chose the National Cowboy Poetry Festival to portray as a victim. Instead, the festival he was trying to protect often gets invoked by critics as an example of government waste:

He was wrong on the facts as well, by the way. The organization that puts the festival together only gets about three percent of its funding from the federal government. So those poor poetry-loving cowboys are getting dragged through the mud now over just pennies.

Next on the tour we have Reid's opposition to anything that causes any sort of restraint or cutbacks to the moribund U.S. Postal Service. Reid has a particularly despairing view of what goes on in the lives of seniors today:

As much as he was willing stand up for the right of senior citizens to get the kind of regular emotional boost only Little Caesars coupons provide, he was more than willing to toss the elderly under the bus to try to protect Obamacare from criticism for its broken exchange sites. They're not broken! People are just stupid!

And when the fight over funding the Affordable Care Act led to the government shutdown 2013, both sides played hardball. A CNN reporter made note of a compromise offered to restore a part of the National Institutes of Health that funds clinical trials for children with cancer. There are a lot of different ways to defend holding the line on negotiations. Reid chose the road much less taken:

Don't you understand, CNN? Those kids weren't a voting constituency in Nevada! How stupid are you? So irresponsible!

And, of course, we can't end without bringing up Reid's late obsession with invoking the libertarian conservative Koch brothers at every opportunity. First, the big supercut of Reid mentioning the Kochs over and over again on the Senate floor:

So Reid's against money in politics. That's not an unfamiliar attitude. Oh, wait. No. Don't be silly. He's just against the wrong people's money in politics. Here he is talking about his pal Sheldon Adelson, the casino magnate who spends millions and millions of dollars influencing elections. But see, it's different! He cares:

If you don't understand Reid's argument, let The Daily Show break it all down for you:

And finally, saving the best for last, here's an utterly incomprehensible Sen. Harry Reid trying to explain why taxes in America are actually "voluntary":

Because deductibles! He also, in a more recent radio interview, insisted that everybody loved paying more taxes, even the rich. It was literally only Republican members of Congress who were against more taxes.

Farewell, Reid. Enjoy those circulars arriving in your mailbox during your retirement. I believe Living Spaces is having a sale on recliners.