Students asked to refrain from anxiety-triggering clapping, use jazz hands instead 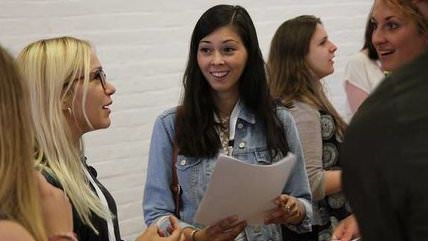 Jazz hands—the sight, the words, the very concept—have been known to trigger spontaneous fits of laughter in my world. Hence the warning in this headline. But jazz hands are actually the "safer" option, according to folks at a U.K. student conference.

In a tweet sent out earlier today, the National Union of Students (NUS) Women's Campaign requested that attendees please express approval with jazz hands rather than clapping. The original request apparently came from Oxford University representatives.

Now I've been in meeting or conference settings where clapping was deemed too disrputive to the flow of discussion. Using jazz hands instead of clapping is not a rare or especially ridiculous proposition. But the reason given here—claps are too anxiety-provoking—is a new one for me.

The National Union of Students (NUS) is an organisation representing about 600 students' unions at U.K. universities and colleges. The students gathered at today's Women Students' Conference are delegates from these student bodies who were elected "to represent students' views on a National level" and set new policy for the NUS Women's Campaign.

Today and tomorrow delegates are debating various member-submitted motions, which include both the good and the bad from a libertarian standpoint. From column A: a motion to support the decriminalization of sex work and a motion to "call for the abolition of the prison-industrial complex." From column B: a motion "against all methods of charging students for education," and a motion to note that capitalism must "be beaten" along with patriarchy.

Other motions included a move to refrain from using terms like "sisters," "both genders," or "any other terms that refers to a binary or two gender system"; a motion "to work to eradicate the appropriation of black women by white gay men"; and a resolution for NUS Women's Campaign not to share any platform with writer Julie Bindel.