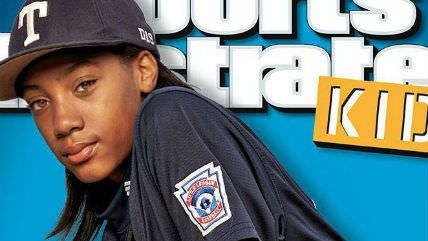 In this world of perpetual outrage at and cocooning from allegedly hurtful acts of speech, it may take a 13-year-old girl to introduce a long-overdue sense of proportion. Mo'ne Davis, the Little League superstar, Sports Illustrated cover girl, subject of a Spike Lee mini-doc, and the only reason my 6-year-old daughter ever watched more than 10 consecutive minutes of baseball on television, issued a startling act of forgiveness yesterday, asking the Bloomsburg University baseball team to reinstate the recently dismissed star baseball player Joey Casselberry.

What did Casselberry do to get bounced? This:

That's stupid even by baseball-player standards.

While I admit I was pretty hurt when I read his comments, I felt sad that he was dismissed from the team….I am sure Joey Casselberry has worked very hard to get where he is and dreams of playing in the major leagues. For this reason, I'm asking you to please allow him back on the team so that he can continue to chase his dream. He made one dumb mistake. I'm sure he would go back and change it if he could.

So did the university get Mo'ne's message? Nah—the school is "standing firm" in its decision.