No, SB101 will not result in public safety workers refusing to do their jobs. 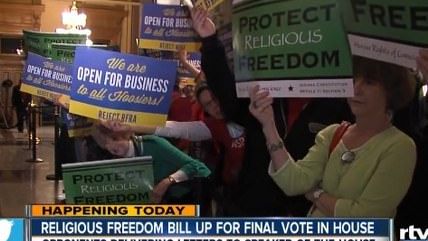 Sec. 8. (a) Except as provided in subsection (b), a governmental entity may not substantially burden a person's exercise of religion, even if the burden results from a rule of general applicability.

I want to point out this wording first because it is pretty much the same as the already existing federal Religious Freedom Restoration Act (RFRA). The existing RFRA applies only to the federal government and federal laws (efforts to apply federal rules to the states were struck down by the Supreme Court).

Here's how opponents of SB101 are describing what it does:

[T]he Human Rights Campaign (HRC) is sounding the alarm on a bill under consideration in Indianapolis. Senate Bill 101 … is part of a wave of anti-LGBT legislation emerging across the country that threatens to undermine all existing state civil rights law, unleash a wave of litigation, and damage the economic climate and reputation of the states in which they are being considered.

S.B. 101, entitled the "Religious Freedom Restoration Act," empowers individuals to sue the government over any policy that they believe infringes on their personal religious beliefs. If passed, the law could empower police officers to refuse to patrol the areas around synagogues or mosques, allow doctors to withhold medically-necessary information from their patients, or expose the LGBT community to a wave of new forms of discrimination.

In Indiana, local employers including Eli Lilly & Co. and Cummins have spoken out against S.B. 101, arguing that the bill is bad for business. Similar legislation has been opposed in other states by other major companies including Wal-Mart and Apple out of concern that they undermine existing civil rights law and deeply harm the business climate of states in which they are passed.

"Religious freedom is critically important, that's why it's enshrined in our constitution and state and federal law," said HRC Legal Director Sarah Warbelow. "But bills like S.B. 101 open a can of worms—they empower any individual to pick and choose which laws they want to follow and which laws they don't, and they expose countless Hoosiers to new and pernicious forms of everyday discrimination."

So is Warbelow not aware that this state-level law actually mimics the federal version that she notes is "enshrined" in federal law? And is she aware that any Indiana officer trying to sue to keep from patrolling synagogues and mosques would possibly lose under section 8b? The National LGBTQ Task Force breathlessly described SB101 as the "nation's most anti-LGBTQ law," again despite the fact that similar laws exist in several states and in the federal government.

I understand that HRC and other gay groups oppose the law as a matter of principle against anti-gay discrimination. I get it, even if I don't share their fears that businesses are just raring for an excuse to turn gay people away and don't believe in these restrictions to freedom of association. I object to their attempt to characterize this as some sort of new thing. These state level laws are happening because the federal RFRA doesn't apply to the states and—well, yes—there are businesses out there who don't want to acknowledge gay marriages by providing goods and services. I'm not going to pretend that they're not and that their desires are not a driving force behind these laws. But it's disingenuous and dishonest to completely ignore the extremely important caveats that keep the law from threatening public safety. If you want to make the case for wedding cakes, then make the case for wedding cakes. If you want to make the case for antidiscrimination laws, make the case for them. But leave the fearmongering about police and firefighters refusing to do their jobs out of it.

Several states have had laws or regulations similar to these that have been in place for some time. During the Hobby Lobby case (which depended in part on that federal RFRA) Eugene Volokh put together a map showing how different states enshrine levels of religious freedom as they intersect with government policies. Note that according to Volokh's map, Indiana's constitution and courts already seem to require strict scrutiny whenever the law abridges religious freedom.

And a final libertarian caveat that I tend to forget when writing about this topic: It's fundamentally unfair that people who are religious get additional opportunities to assert their freedom of association rights that others do not. Imagine if section 8b said the government couldn't "substantially burden a person's exercise of free association" except in cases where there's a compelling government interest?