Politician famous for humorlessness says we have a "fun deficit." 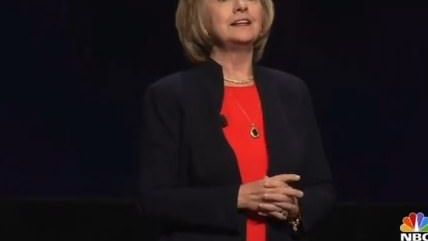 The punchlines write themselves on this one, and that's exactly what's happening. Hillary Clinton, soon to announce her candidacy for president, spoke last night before the American Camp Association in New Jersey. In an effort to try to connect with her audience, she said, "We really need to have camps for adults. … None of the serious stuff. None of the life challenge stuff. More fun. I think we have a huge 'fun deficit' in America."

So Clinton hands over to us all to consider the idea of a progressive sending adults to camps, and the idea of a politician infamous for being humorless and suspicious being an arbiter of "fun," wrapped in a great big bow. Obviously conservatives are having a field day, and #HillaryFunCamp is trending on Twitter.

In these camps, Clinton wants Americans to really concentrate on the important things. "We need some reminder about life skills from time to time, maybe some enrichment, certainly some time outdoors."

On an entirely unrelated note, "joycamp" was the Newspeak term for forced labor camps in George Orwell's 1984.

Here are her comments in video form:

And here is Camille Paglia's rant about Clinton from Reason's lengthy interview with her posted earlier today:

What do you imagine happening at a Hillary Clinton camp? One thing's for sure: No emails.