Did President Obama Admit the US is Controlled by Space Aliens? 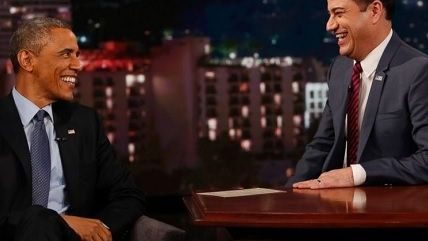 Did President Obama admit the U.S. is controlled by space aliens on his appearance on Jimmy Kimmel Live last night? No, it was a joke. But Poe's Law applies. Space conspiracy theory website Exopolitics.com reports:

A recent disclosure about UFO secrecy by John Podesta, Obama's former White House Counselor for Climate Change and Energy Policy, suggests that Obama was serious about a situation he had no control over.

Here is what Obama said in response to Kimmel according to the LA Times:

[Kimmel] wanted to know whether Obama had tried to get to the bottom of the "UFO files" about the mysterious desert region known as Area 51. "The aliens won't let it happen," Obama joked. "You'd reveal all their secrets. They exercise strict control over us."

But President Clinton once said he'd checked on the matter and found nothing, Kimmel protested. "That's what we're instructed to say," Obama responded.

Obama's comments come only one month after Podesta claimed that his biggest failure for 2014 was: "Once again not securing the #disclosure of the UFO files."

UFO disclosures have been relatively popular in recent years, though they've contained no smoking guns. The CIA's admitted to being responsible for many of the UFO sightings reported in the 50s and 60 that helped drive the UFOlogy craze into the mainstream.

Watch the portion of Obama's appearance on Kimmel below: