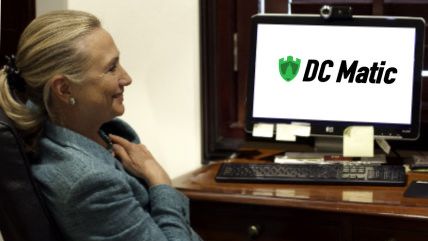 "DC Matic: The Hillary-Approved Email Server!," written and performed by Remy and produced by Meredith Bragg. About 2 minutes. Original release date was March 13, 2015 and original writeup is below.

Do you run a government agency but hate complying with the law? Then you need DC Matic, the Hillary Clinton-approved email server!

Here's how it works:

First you select the government business you'd like to conceal from the public.  Then, simply use DC Matic's proprietary privacy controls to fix the problem. Simple as that!

Having two email addresses is confusing and a terrible idea. And gone are the days of destroying hard drives or creating a fake male alias to secretly conduct business. You Need DC Matic!

Written and performed by Remy. Video directed and edited by Meredith Bragg.