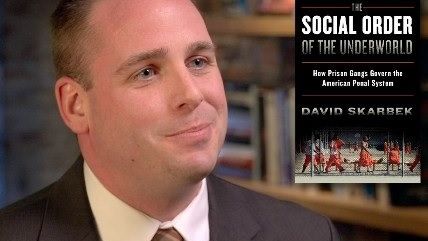 "Gangs in Control of American Prisons: The Social Order of the Underworld," interview by Nick Gillespie and produced by Anthony L. Fisher. About 10 minutes. Original release date was March 12, 2015 and original writeup is below.

"We need to make prisons smaller and safer so that inmates don't have to turn to gangs for protection," says David Skarbek, a lecturer in political economy at King's College in London and the author of "The Social Order of the Underworld: How Prison Gangs Govern the American Penal System."

In an interview with Reason TV's Nick Gillespie, Skarbek talks about how American prisoners once relied on an unwritten "convict's code," which essentially encouraged inmates to be good neighbors or face ostracization. As the prison population began to swell in the 1960s, the decentralized methods used by inmates to protect themselves were replaced by the rise of prison gangs as "an alternative source of governance."

Skarbek also talks about how tattoos are a "credible way to provide information" to other prisoners, and why reducing the prison population is vital to mitigate the influence of prison gangs.

Music by: Music: "Applicant" by The Matt Kurz One.