And humans are doing what we have always done in the face of change: anticipating and adapting where we can, muddling through where we can't, and trying to enjoy the ride. 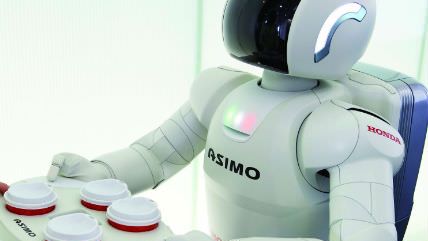 The shiny white robot approaches the Honda employees seated around a table. It turns its black faceplate to the humans, makes an open-handed gesture, and asks if they want anything to drink. The people all speak simultaneously. What initially seems like rudeness turns out to be efficiency: ASIMO, the most advanced humanoid robot on the market, can understand multiple voices at once and uses facial recognition software to match the men with their requests. But as ASIMO walks away to pick up the drinks, it's apparent that there's much work ahead for Honda's engineers. The gait of the hobbit-sized machine is slow, with the knees-bent, elbows-out posture of a cautious toddler on unfamiliar turf.

Watching Honda's latest shuffle along creates a kind of vertigo. The robot revolution seems simultaneously upon us—look, a real robot serving coffee!—and eons away, writes Reason managing editor Katherine Mangu-Ward. But that dissonance is a clue that we are nestled in the elbow of an exponential curve. Your house, neighborhood, and office are already full of the robots humanity has been waiting for with both anticipation and dread. They may be the equivalent of trilobites now, but they're multiplying and mutating rapidly. While pessimists fret that a new kind of intelligent automation will mean social, economic, and political upheaval, Mangu-Ward argues that the robots are already here and the humans are doing what we have always done in the face of change: anticipating and adapting where we can, muddling through where we can't, and trying to enjoy the ride.