Beltway Bubble Alert: Americans Split on Whether Being Gay Is a Choice

Equal numbers say it is and isn't. Whether that will help Ben Carson remains to be seen. 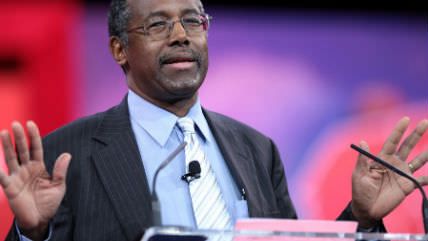 Ben Carson, the apparent 2016 hopeful, thinks being gay is "absolutely" a choice. He made that clear in an appearance on CNN last week. That may or may not be enough to disqualify him from being president, as some commentators have suggested. It certainly led to a lot of facepalming from election watchers inside the Beltway, myself included. But it's always worth being reminded that things sometimes look different outside the confines of Washington, D.C.

A report from Pew, released on Friday, shows that Americans as a whole are as likely to think that being gay or lesbian "is just the way some people choose to live" (42 percent) as they are to think that "people are born gay or lesbian" (41 percent). Admittedly, the percent agreeing with Lady Gaga that gay people were born that way has doubled over the last three decades—but it's still nowhere near a majority.

The even divide among all Americans masks a noteworthy trend, however: The more educated a person, the less likely she is to think homosexuality is a choice. Individuals with postgraduate degrees are twice as likely to say gay people are born that way than to say it's simply how they choose to live. Meanwhile, those with a high school diploma or less see homosexuality as a choice by a 13 percentage point margin.