Altruism can be such an eyesore, complain neighbors. 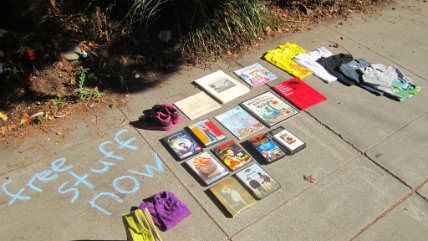 In Sacramento, a group of charitable housemates has been holding free giveaways on their front lawn. All recently homeless, the housemates say they benefitted from the kindness of strangers in their times of need and now want to pay the goodwill forward by distributing donated goods to others. But the city is trying to shut down the operation, which it says counts as an illegal garage sale.

Under Sacramento city code, residents may only hold one lawn or garage sale per year; holding too many sales will yield a preliminary warning, followed by a fine of up to $1,000 upon the second offense. Kate Worsley and her housemates received a warning from the city last week, according to CBS Sacramento. Officials say the home has been holding too many garage sales and must be considered a business, which the neighborhood isn't zoned for.

Worsley insists that what they're doing isn't a sale at all, but a giveaway. All items, from used baby toys to canned goods to romance novels, are donated from members of the community—the housemates solicit them via a "pay-it-forward" Facebook group—and given away for free. Cash donations are accepted from those who want to give, with the money going to provide Sunday sack lunches for the homeless.

But altruism can be such an eyesore, complain neighbors like Brent Sanchez, who called the whole business "kind of tacky."

Worsley and her housemates are now considering whether to fight the city's code enforcement or start holding the giveaways at different homes around the area. Regardless, "code enforcement will not stop me from helping people," Worsley posted to the "Pay It Forward In Sacramento Ca" Facebook group. "I am still taking donations to help provide the people in need with the things they need," she told me in a message.