Focus and Maps to the Stars 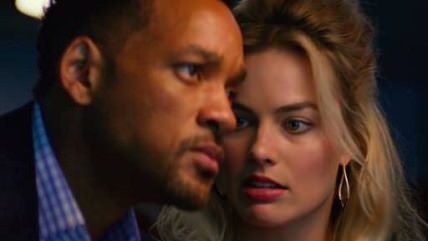 Focus is a double-cross comedy that doesn't quite work. Will Smith plays Nicky, a third-generation conman and leader of a sizable crew of fellow swindlers who prey on unsuspecting marks at big sports venues. Margot Robbie is Jess, a minor-league con girl with an eye on the big time, and on Nicky as her chosen mentor. The stars have a road-tested appeal—Smith with his familiar jaunty charm, Robbie with the sunburst beauty and tangy comic instincts she so memorably displayed in The Wolf of Wall Street. The locations—New York, New Orleans, Buenos Aires—are passably glamorous, and some of the rip-off techniques are fun to watch. The setup primes us for a movie that sparkles with breezy romance, light-hearted larceny and deluxe travel accommodations. Unfortunately, that movie never fully arrives.

Which is not to say it's dull. Writer-directors Glenn Ficarra and John Requa (Crazy, Stupid, Love) have a slick facility for comic dialogue (Nicky describes his carnal inclinations as "Saudi bachelor-party shit"), and they know how to structure tricky scenes. They have Nicky and Jess meeting funny in a glittery Manhattan hotel, where she tries to run a con on the master hustler and fails spectacularly. He likes her spirit, though, and brings her aboard as a sort of criminal intern. They move on to New Orleans for some Super Bowl scammery, with Jess joining Nicky's minions as they move through the crowds lifting wallets and jewelry, rigging ATM machines for unauthorized payouts, and perpetrating on-the-fly identity thefts. Pretty neat.

At this point, we're ready for love to blossom, and Nicky and Jess do in fact engage in some mild horizontal snogging. But Nicky—who of course trusts no one—pulls back and sends Jess away. They meet up again three years later in Buenos Aires, where Nicky has come to bilk a Formula One race-team owner named Garríga (Rodrigo Santoro), who it turns out is also Jess's current boyfriend. But she still loves Nicky, and he still…well, you get the picture.

The movie has two major problems. One is plausibility. The con that Nicky plans to run on Garríga makes no sense in the end. And there's a long scene in a high-roller suite at the Superdome, with Nicky caught up in a series of wildly escalating bets with a world-famous gambler (BD Wong), that is flatly unbelievable. The movie's conclusion, which involves a gun-wielding thug (Gerald McRaney), is similarly preposterous, and in more ways than one.

The picture's other problem is crucial: Smith and Robbie, against all odds, have no chemistry. Robbie gives it her all, and she's entirely winning, especially in a foul-mouthed café scene with Nicky's rotund tech chief, Farhad (an excellent Adrian Martinez). But Smith, perhaps still smarting from his last starring role, in the misbegotten After Earth, is plagued throughout by a glumness that undermines his natural buoyancy. After a while we begin to wonder what Jess sees in Nicky. And then we begin to wonder how much Smith, normally among the most personable of Hollywood stars, still sees in himself.

Maps to the Stars

David Cronenberg's Maps to the Stars is a Hollywood horror movie that feels several decades out of date. The characters—has-been actors, creepy child stars, oily agents, and self-realization gurus—are grotesque clichés, dedicated to backstabbing, career scheming and—why not—incest. There are also a few ghosts passing through the action—dead children, mostly—and they're terrible people, too. Everyone is so thoroughly repulsive that even confirmed Hollywood-haters are likely to find the film excessive. It's as if Day of the Locust had been remade by actual locusts.

Bruce Wagner's script, with which he's been tinkering for something like 20 years, allows Cronenberg —leaving his native Canada to shoot in Hollywood for the first time—to indulge his sourest misanthropy. The resulting movie manages to be both repugnant and ridiculous—no mean feat, but one with no purpose, either.

Julianne Moore plays Havana Segrand, a washed-up star who's desperate for a comeback, and may have found it in a remake of an old movie that featured her mother, "a dead cult figure." John Cusack is Havana's icky therapist, Dr. Weiss, who also has a smarmy late-night TV show called the Hour of Personal Power. Weiss and his wife (Olivia Williams) have two kids. One of them, 13-year-old Benjie (Evan Bird), hit it big as the pre-teen star of a movie called Bad Babysitter. Now, fresh out of rehab, he too is angling for a comeback. The Weiss's other child, of whom they never speak, is Agatha, an 18-year-old schizophrenic who has just returned to town from the sanitarium to which she was confined after setting a fire some years back that killed a third sibling, nearly killed Benji (whom she dreams of marrying), and left her covered with burn scars.

Agatha makes a tentative connection with Jerome (Robert Pattinson), a limo driver who wants to be a screenwriter. (Wagner once worked as a limo driver himself, which may explain why Jerome is the movie's only non-headcase character.) Then Havana hires Agatha as a personal assistant (or "chore whore," as the older woman puts it), and the picture begins its precipitous downhill descent.

There are scenes in this movie that no actor should be called upon to play, chief among them the one in which Havana converses with Agatha while sitting on a toilet and emitting loud gas-passing noises. The dialogue is sometimes equally challenging. ("You don't have to worry about me starting any more fires," Agatha says. "I put my pilot light on.") Evan Bird's performance as Benjie is a mixed accomplishment: he's completely convincing as a completely monstrous screen brat. (Even at his tender age, Benjie is the kind of cold-blooded careerist who will stage a make-a-wish visit to a dying young fan strictly as a publicity move.) Cusack is unfortunately skillful at playing the world's most heartless dad, and the various other characters hovering around the action contribute predictable infusions of fawning insincerity. (Carrie Fisher also passes through at one point, presumably as a favor to someone or other.)