Support in Washington for an even longer war in Afghanistan is growing. 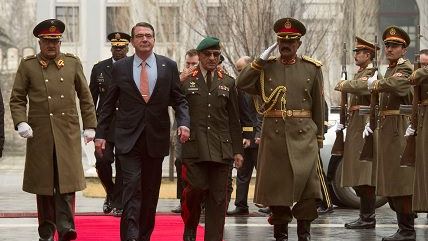 Despite the ceremonial end of combat operations last year, the war in Afghanistan appears to be escalating. And while the work on an authorization for the use of military force against the Islamic State in Iraq and Syria (ISIS) that Congress could back continues, even though President Obama says he doesn't need it, bipartisan support for continuing efforts in Afghanistan is a lot broader, as Roll Call reports:

A growing number of key Senate Democrats have quietly joined Republicans and Pentagon leaders in advocating a slower withdrawal and a longer stay for U.S. troops because of concern about the security situation.

Republicans have long criticized the administration for setting dates for the withdrawal, and now Democrats who oversee the Pentagon have gradually begun to agree — and they have done so more and more openly. They appear concerned that without U.S. troops, the situation in Afghanistan could quickly deteriorate, as it did in Iraq after U.S. forces left more three years ago.

According to the new defense secretary, the White House is still mulling over a request from the new president of Afghanistan to slow down the withdrawal, which is supposed to leave 10,000 troops in the country at the end of 2015 and none by the end of 2016.

While Congress' appetite to approve an open-ended mission against ISIS appears blunted—about as many members appear to believe the president's limited AUMF goes too far as that it doesn't go far enough—the general appetite for war remains whet. While the ISIS AUMF would repeal the 2002 Iraq AUMF, there's been no effort to amend the 2001 Al-Qaeda AUMF under which the government says the war in Afghanistan as well as counter-terror operations from Somalia to Pakistan falls.

President Obama ran for re-election in 2012 under the misleading claim that he had ended the war in Iraq. As ISIS ran rough-shod over the forces of a broken Iraqi government, Obama walked back that claim, acknowledging not only that the decision to withdraw troops was not his but that he wanted to keep troops in Iraq.

The fear that the perceived progress made in Afghanistan over the last 13 years could evaporate after the departure of U.S. troops could keep them on the ground far longer than 2016. Afghanistan was ruled by the Taliban for years before the 2001 U.S. invasion helped propel the Northern Alliance into power. In the more than ten years since then, Western support for the Afghan government has kept it corrupt and dependent on foreign aid, which accounts for up to 97 percent of Afghanistan's GDP.

Government planning and intervention doesn't work to improve the economy at home, and in fact often makes things worse. The idea that government could plan an entire nation overseas, the core argument underneath the layers of national security posturing, ought to be preposterous. Absent the U.S. invasion of Iraq, it's unlikely ISIS would have grown the way it has. And who knows how long the Taliban would have lasted absent the U.S. war? Even had the U.S. declared the war over and won in 2004, Afghanistan's government, forced to justify its own existence, might have fared better than it has and not still been dependent on foreign troops nearly a generation later.