Streamwood High School substitute has some explaining to do 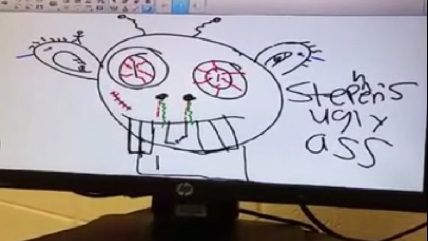 Stephen Davis, a 15-year-old student at Streamwood High School in Illinois, told local media that another student drew an insulting picture on the white board at the front of the class. Davis then watched as his substitute teacher enhanced the picture by making it more grotesque and writing "Stepen's ugly ass" as a caption.

That may sound so mean-spirited—so grossly inappropriate—that it's actually unbelievable. But Davis has proof: he recorded the incident on his phone. The video clearly shows the teacher adding to the crude drawing.

The Daily Herald reached the same conclusion. A reporter interviewed Davis—an overweight teen who is frequently bullied—about his humiliation at the hands of an individual licensed by the state to work in Illinois public schools:

"Everyone told me, 'That looks like you,'" Stephen said in a phone interview with the Daily Herald that included his father and sister. "Everyone was standing there pointing at me, laughing, (while) I'm on the verge of tears."

Stephen said he has been picked on since first grade because of his weight, "but I always learned to just move along. … (It) is basically background noise."

Yet, this is the first time a teacher mocked him in front of the class, he said.

"He should not be allowed around children, if he's going to do this to someone," Stephen said. "No other family should have to go through this suffering. This is unimaginable."

The school district is investigating the matter. We'll see what comes of that.