Watch: These Parents Were Scared to Let Their Kids Walk Alone in New York City. They Did It Anyway. 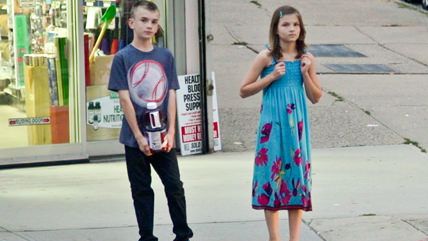 Growing up on a small farm in rural New Mexico, Rusty Heath remembers his mother telling him on summer mornings "go do whatever you're going to do, don't hurt yourself, and we'll see you later." He and his twin brother would spend their days horse back riding, camping, and fishing…without adult supervision. Rusty's wife, Leah, also a New Mexico-native, had a similarly free-range childhood. "We would go and ride our bikes and chase lizards," she says, "and we were out there till we felt like coming back, and I don't remember anyone coming looking for us."

After a recent move to New York City, the Heaths found themselves reluctant to extend similar freedoms to their own kids, Cassidy, 10, and Riley, 12. "[They're] on a much tighter leash than

I was," says Rusty. "I feel like my family is my responsibility and it's difficult to put your kids' safety at risk."

Enter Lenore Skenazy, who's a regular Reason.com contributor, a former New York Daily News and New York Sun columnist, and the host of a new show on the Discovery Life Channel called America's Worst Mom. Skenazy, who launched the free-range kids movement in 2008 after getting wide attention for a column explaining why she let her nine-year-old son take the subway by himself, recently started making house calls to nervous parents.

Skenazy came by the Heath home one evening. Click the video above to find out what happened next. Click the link below for downloadable versions of this video.