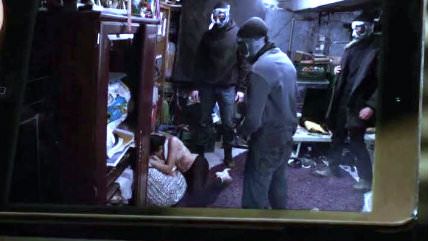 On Wednesday night, Law & Order: Special Victims Unit aired a new episode loosely based on GamerGate. Anyone who was expecting a fair and nuanced take on the controversy a) was likely disappointed, and b) clearly doesn't know Dick Wolf. In the episode Raina Punjabi, a feminist video-game developer and Zoe Quinn/Anita Sarkeesian stand-in, makes a ridiculous game about starting a matriarchy (title: Amazonian Warriors) before being kidnapped from a speaking engagement by masked men menacingly intoning, "No social justice in gaming!" She is then beaten, raped, and made to address the public in webcasts reminiscent of ISIS beheading videos.

In the end, Punjabi is rescued—thanks in part to Ice-T's mastery of the Dark Net—and tearfully laments that she ever believed in a role for women in gaming. The episode manages to make feminists look absurd and gamers look like a horde of misogynistic psychopaths. It was pretty standard treatment for Law & Order, where all of the franchises, but especially Special Victims Unit, tend to focus on "ripped from the headlines" (or Twitter timelines) stories in the most sensationalistic, melodramatic, and moral-panic filled way possible.

"Had we made up a 'SVU does GamerGate' bingo card, we might have made out like bandits," writes Sam Machkovech at Ars Technica. "The following bullet points all made appearances: swatting; doxing; a woman's public gaming appearance marred by death threats; wacky gaming phrases like 'no reset button in the real world'; the use of the phrase 'social justice warrior' as a slur; and a fake website named, we kid you not, RedChanIt."

Kotaku's Jason Schreier called the episode "corny, terrifying shlock that demonizes hardcore gamers and turns complicated conversations over misogyny in gaming into a cartoon caricature of good vs. evil." Others have criticized the show's conclusion, which seemed to imply that perhaps women should just stay out of the gaming world.

I don't think there are any great takeaways from this debacle (though I do highly recommend watching the episode for comedic/oh-no-they-didn't value). But it's perhaps interesting to note that social media social justice battles have made other major TV appearances in the past week, as well.

On Tuesday's episode of the sitcom Parks And Recreation, main character Leslie Knope (Amy Poehler) found herself battling a group of men's rights activists (MRAs) calling themselves the "Male Men." The Male Men are upset because Leslie's husband Ben (Adam Scott) is running for office, and he has volunteered to bake a pie himself for "the Pie-mary," a baking contest traditionally taken on by candidates' wives. A group of MRAs show up to protest, with lines like, "Can we have one conversation about feminism where men get to be in charge?" Eventually, Ben and Leslie tell them off, ending with the line: "You're ridiculous and men's rights is nothing."

Both MRAs and those who hate MRAs have written against the way the show reduced them to easily-dismissed stereotypes. But as with Law & Order's GameGate episode, I'm not sure we should make too much of it. Parks and Recreation is a sitcom populated almost exclusively by over-the-top characters and stereotypes/situations taken to an absurdist level. If there's any cultural insight to be gleaned here, it's simply that groups and terms like "men's rights activist" and "social justice warrior" have made the über-mainstream.

The most interesting of the hot-topic cultural debates to make it on to the boob tube this week comes via Switched at Birth, a popular sitcom on ABC Family. In a two-part episode that culminated Tuesday night, one recurring character (Tank, played by Max Adler) is expelled from the University of Missouri-Kansas City when main character Bay Kennish (Vanessa Marano) accuses him of rape.

Tank and Bay had been at a college party together, both drinking, when some sort of sexual incident occurs. Refinery29 recaps:

Bay told her mother what happened, but pretended the story was about a friend of hers. She asked her mom if it was wrong that her "friend" cheated, even though she doesn't remember. Instead, her mother replied that it was wrong her friend was raped. Bay was dumbfounded — it never occurred to her that she might be a victim of a crime. Regina insisted that, at least in her opinion, if Bay's "friend" was really drunk, then she couldn't give consent. Bay wasn't so sure; that label sounded scary and foreign, and it didn't describe how she felt.

She decided to discuss the night with Tank, who became defensive. From his perspective, Bay wanted to have sex. She was the one who kissed him, and if she had said no at any time he would have stopped.

We then watched two different flashbacks of Tank bringing Bay water in bed during the party. We don't know whose version of events to trust, or if either one provided an accurate portrayal of what happened. In Tank's version of the night, Bay insinuated that she was going to dump Emmett and leaned in for a flirty kiss, laughing about being really drunk. In Bay's version, her vision was blurry, and she was visibly intoxicated, mumbling incomprehensible things about her boyfriend. She pulled away from Tank's kiss and said how drunk she was before passing out. The conversational details are the same, but the tone and body language were very different. We also find out that Bay felt sick and hit her head during the party.

During a pivotal moment in their confrontation, Bay told Tank that she may not have said "no," but had she ever said "yes?" Tank doesn't answer the question. It was obvious that Bay "wanted it," he insisted. Did she really expect him to ask her if every touch was okay?

So far, so good—it actually sounds like the show presented a nuanced look at how the same sexual situation may be perceived differently by two different (and intoxicated) individuals. Refinery29 described Tank as a "fan favorite" character, so ostensibly viewers aren't meant to take him as pure villain. Where Law & Order and Parks and Recreation gave us clear-cut, caricaturish versions of good guys and bad guys, ABC Family actually confronts the fact that sometimes good and bad are blurry.

In an inteview on Zap2it, show creator Lizzy Weiss said her team "really wanted to [open] up a dialogue about this. Right now there is not consensus. It is so polarized on campuses, not just between genders—but administrators, professors and parents in particular. What is considered rape or assault? We really wanted to do a story in which everyone has to look at their choices. Everyone has to think about and talk about how to behave under these circumstances."

Eventually, in the second episode, Bay decides not to press charges or pursue further action—though the university goes ahead with a Title IX case against Tank anyway. Bay is pressured to tell her version of events to the Title IX investigator, which she does, after which Tank is expelled from the university. The episode, titled "Black and Gray," seems rather ambivalent about whether justice has been served, leaving genuine room for fans to hash out the matter on social media (which many did under the hashtag #BaysDecision).

Compared to most media coverage of campus assault, Switched at Birth did a commendable job, but that doesn't mean the episodes were without their faults. Take this conversation between Bay and her friend about what took place:

"So what? That doesn't mean he can do whatever he wants."

"All I know was when I woke up, I felt like something was wrong. But, is that crazy, going on intuition?"

"No. You have to trust yourself."

I'm not sure that teaching young people to trust some vague feelings of wrongness as a basis for sexual assault allegations are a good idea. Here we literally have on character saying, "It doesn't really matter whether you said yes or no, what matters is your impression of the incident the next day." And throughout the episode, we have characters pushing the idea that Bay was "too drunk to give permission," as she tells Tank. He replies:

"I didn't know it was without your permission!"

Bay: "Somewhere, in your mind, did some part of you know that what you were doing was wrong?"

"But, did you have a feeling that you were doing something wrong?"

Again, the idea seems to be that vague, subjective impressions are key. Even though Bay didn't say no, and may have said yes, this consent isn't supposed to have counted because she was had been drinking. Tank's drunkenness, meanwhile, is ultimately presumed not to matter, with his guilt or innocence predicated on whether he felt any shame during the act. What kind of impossibly unworkable consent standards are these?

To her credit, Switched at Birth's creator doesn't necessarily seem to think this is optimal, only the way things are. In an interview with Cosmopolitan magazine, Weiss said "we want to help guys understand: Even if it's a yes, if she's too drunk to know she's saying yes or to remember it the next day, you might be called to the carpet for that. And, you need to be aware of that making those choices going forward."

I suppose that may be a smart lesson to teach in this current climate. But it's also a relatively insane way to look at rape law: No doesn't mean no, yes doesn't mean yes, and all drunk sex is rape. Because, honestly, college kids (and grown adults) aren't going to stop having sex while drunk. Which leaves us only the takeaway that nothing said during a sexual encounter matters at all.