WATCH: Campbell Brown on Her Fight To Get Lousy Teachers Fired

The former TV journalist is on a mission to reform New York's tenure laws. 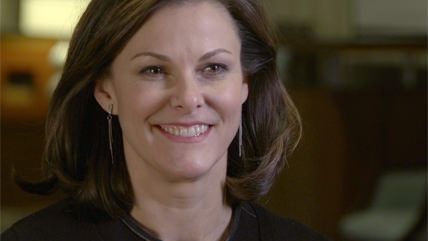 New York State Supreme Court Justice Philip Minardo is expected to issue a decision within the next few weeks on whether a lawsuit that could make it easer to fire lousy teachers in New York State can proceed. Campbell Brown, the former CNN host, through the organization she founded, the Partnership for Educational Justice, played a key role in backing and supporting the lawsuit.

Reason magazine Managing Editor Katherine Mangu-Ward caught up with Brown recently to discuss the lawsut. Click above to watch that interview, which was originally released on January 13. Here's the original writeup:

Oral arguments are scheduled to begin on Wednesday in Wright v. New York, a lawsuit filed in New York State Supreme Court last July that seeks to overturn certain teacher tenure protections on the grounds that they deny public school students their constitutional right to an adequate education.

Former CNN anchor Campbell Brown, whose organization, the Partnership for Educational Justice, is providing support for the plaintiffs in the case, says that the lawsuit was inspired by the outcome of Vergara v. California. In that lawsuit, a superior court judge struck down five statutes that provide tenure protections to teachers in the Golden State. (The decision is under appeal.)

"Judge [Rolf Treu], in how he wrote his decision, was quite extraordinary," Brown told Reason magazine Managing Editor Katherine Mangu-Ward in an interview for Reason TV. "[He wrote] that the evidence presented of how these kids were being denied a quality education shocks the conscience," said Brown, "and it

gave these parents…hope that a judge in New York might understand these arguments and find the same thing."

In her interview with Mangu-Ward, which took place at the National Summit on Educational Excellence in Wasington, D.C., Brown also discussed her decision to leave journalism for the "glamorous world" of ed reform, her response to critics who object to her tactic of turning to the courts to shape policy, and the personal attacks she's endured since entering a field in which ad hominem attacks are the norm.

"I don't particularly care because, you know, sticks and stones."

Shot by Todd Krainin and Joshua Swain. Produced and edited by Jim Epstein.