Parents Organize for Another Charter School Transition in California 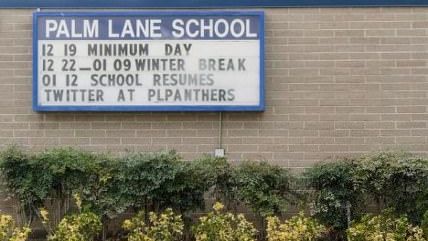 Parents are intervening with their struggling elementary school in Anaheim, California, home of Disneyland, looking to use the state's "parent trigger" law to force a charter program takeover. The school, Palm Lane Elementary, which primarily serves minority (particularly Latino) students, has been on the federal government's list of underperforming schools for more than a decade. According to the Orange County Register, organizers managed to get petition support from the parents of two-thirds of the students currently attending the school. Here's what happened to a principal who tried to improve education there, according to the Wall Street Journal:

The elementary school began to turn around in 2013 under new principal Roberto Baeza, who had previously improved test scores at another chronically low-achieving elementary school in Anaheim. Palm Lane parents embraced Mr. Baeza because he raised expectations and standards such as insisting that teachers assign homework. The teachers union was less pleased.

Last May the Anaheim City School District board abruptly deposed, er, demoted Mr. Baeza for unspecified reasons. "Ensuring a constructive learning and work climate is our top priority," said Superintendent Linda Wagner. "After thoughtful consideration, the school board decided to release Dr. Baeza from his position as principal."

Mr. Baeza was reassigned to teach at another school. When parents protested Mr. Baeza's removal at a board meeting, their microphones were disconnected. Parents then launched the trigger petition and in the fall invited Republican state senator Bob Huff, who co-authored the trigger law, to discuss their options.

Parents were then booted from having organizing meetings at the school district's headquarters unless they had got themselves a $1 million insurance policy. Former Democratic state Senator Gloria Romero, who helped get the parent trigger law passed with Huff and now runs a group to help parents take advantage of it, has filed a complaint with the Anaheim district attorney's office that the district has responded to the efforts by trying to make the organizers look shady and claiming parents are being offered free tutoring and iPads for signing the petition. The organizers deny offering any sort of incentives.

Read more about the parent-triggered charter effort here. Read Reason's interview with Romero, about what it's like to try to fight California's powerful education unions from the left, here.

Reason Foundation is a partner in National School Week, an annual event that draws attention to increasing educational options for K-12 students and their parents. For more information on resources and activities, including more than 10,000 events taking place nationwide between January 25-31, go here now.