No Asylum: Immigrants Locked Up in U.S. after Fleeing Violence 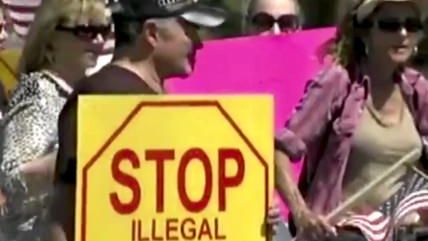 "When people knock on your door, and they are fleeing abuse, the United States is obligated morally and legally to let them in," says Virginia Raymond, an immigration attorney fighting for the right of a single mother and her three daughters to seek asylum in the U.S. after fleeing gang violence in El Salvador.

"Today, our immigration system is broken, and everybody knows it," proclaimed President Obama in a speech announcing an executive action to shield the 4-5 million undocumented immigrants who've lived in the U.S. for five years or more from deportation. In making his case, he shared the story of "Astrid," a college student afraid to attend her grandmother's funeral in Mexico for fear that she'd never make it back over the border.

What the president didn't address in that speech was the influx of immigrants coming from further south, from the Central American countries of Guatemala, Honduras, and El Salvador. These are immigrants making the treacherous journey to the border not only for economic opportunity, but to flee violence that threatens their lives and those of their children.

Headlines screamed of a "border crisis" as unaccompanied minors began arriving in record numbers in the summer of 2014, sparking protests in border towns like Murrieta, CA from citizens who wanted the newly arrived immigrants sent back to where they came from. The administration's response was to request $879 million from Congress to detain and deport.Congress denied the funds, but Homeland Security forged ahead with the construction of several new "family detention centers" anyway. The number of beds grew from fewer than 100 to more than 1,000 in less than a year. And a newly constructed center in Dilley, TX will have a capacity of more than 2,000.

Watch the Reason TV video above for a glimpse at who exactly is being held in these detention centers at record rates. The video profiles Marquez and her three daughters, who came to the U.S. from El Salvador after facing violent threats and extortion from gang members. While Maria and her family were seeking asylum from a dangerous gang that operates unchecked by an incompetent and often corrupt government, they almost immediately found themselves locked up in a family detention center in the small Texas town of Karnes, where they've spent the past six months fighting to avoid deportation.

"These are people who want to work, who are peaceful, loving people. And they don't deserve to be sent back to be raped and killed… in a country that does not value them, with a government that cannot or will not protect them," says Raymond.