Houthi rebels have stormed the presidential palace in Yemen, also home of Al-Qaeda in the Arabian Peninsula. 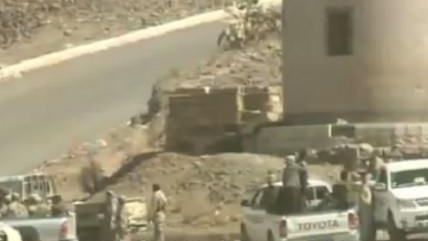 Houthi rebels in Sanaa have stormed the presidential palace and Yemen's president has "no control" according to the Information Ministry. The White House has not addressed the situation, and Yemen was dropped as a State of the Union reference this year.

Last September, as President Obama recommitted U.S. troops to Iraq, from where they had been withdrawn less than three years earlier, he promised the campaign against the Islamic State in Iraq and Syria (ISIS) would be different than the 2003-2011 Iraq war. "This strategy of taking out terrorists who threaten us, while supporting partners on the front lines, is one that we have successfully pursued in Yemen and Somalia for years," President Obama said.

Today, the Yemeni government is on the verge of collapse. In 2011, "Arab Spring" protests started in Yemen after starting in Egypt and Tunisia. Eventually Ali Abdullah Saleh, president of Yemen since 1990 and of North Yemen from 1978 until the 1990 unification, was encouraged by regional powers to resign. He was granted immunity by the Yemeni legislature and handed power over to his vice president, Abd Rabbuh Al-Hadi, who won the 2012 election, as the only candidate on the ballot, with 99.8 percent of the official vote.

The U.S. has been conducting covert air strikes in Yemen since at least 2002, when the country was designated part of Operation Enduring Freedom's Afghanistan combat zone. Drone strikes were ramped up during the Obama administration, with the first U.S. citizen, Al Qaeda propagandist Anwar al-Awlaki, killed in 2011. His teenaged son, also an American citizen, was killed in a later strike in Yemen. The Bureau of Investigative Journalism confirmed between 13 and 15 drone strikes in 2014, with 3 additional air strikes and 18 more possible drone strikes. The conservative estimate for the number of dead from these strikes is 103, with at least 13 reported as civilians. In December 2013, a U.S. drone strike reportedly hit a wedding procession, killing 12 and injuring 15, including the bride.

When it could, the Yemeni government took responsibility for the air strikes. Where the U.S. government acknowledges involvement in an air strike, it insists the targets are members of Al Qaeda in the Arabian Peninsula (AQAP). That's impossible to verify, and evidence suggests drone strikes can target enemies of the host governments. "The U.S. increasingly appears to be a acting as a proxy Air Force for Yemen in its civil war with AQAP," Letta Tayler, a terrorism and counterterrorism researcher at Human Rights Watch, told Rolling Stone.

In last year's State of the Union, President Obama still listed Yemen, and Somalia, and Mali and Iraq, as places where the counterterrorism strategies against "core" Al Qaeda were succeeding. Defeating Al Qaeda, and ending the war in Iraq (which he walked backed when shit started to visibly hit the fan), were two of the main points on which Obama won his second campaign. This year, his campaigns got a mention at the State of the Union but Al Qaeda didn't. Does the president have to address the situation in Yemen? Certainly not. But depending on how things play out on the ground over the next few days, U.S. operations in the country may have to be addressed.