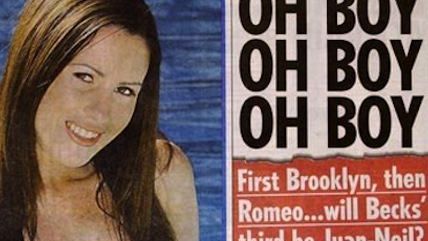 [CORRECTION, 1/21/2015: The Times report relayed below turned out to be inaccurate: The Sun is still publishing topless photos in its print edition. Details here.]

It's the end of an era for English newspapers. According to the London Times,

The Sun will no longer feature topless models on page 3 after quietly dropping one of the most controversial traditions in British journalism.

The Times understands that Friday's edition of the paper was the last that will carry an image of a glamour model with bare breasts on that page, ending a convention that began in 1970, shortly after Rupert Murdoch bought the newspaper and turned it into Britain's bestselling daily tabloid.

The Sun, I should note, will still display ladies' nipples online. Nor will bare boobs be entirely absent from the London papers: Another tabloid, The Daily Star, "was still carrying topless models on page 3 as of yesterday," The Times reports. But this is still a media milestone: It's The Sun that's most famous (or infamous) for publishing photos that in the U.S. would be considered softcore pornography.

Sometimes they'd be considered more than that. Before the U.K. raised the minimum age for topless modeling in 2003, the youngest page-3 girls were 16. As a result, several back issues of the tabloid include images that are now defined as "indecent photographs of children" under British law. American law is trickier: The federal child-porn statute prohibits "lascivious exhibition of the genitals," while The Sun's lasciviousness is focused above the belt, but the courts can be unpredictable in what they allow. And some states are more restrictive than the feds. In Arizona, for example, "persuading" someone under 18 "to expose the…nipple of the female breast for financial or commercial gain" constitutes sexual exploitation of a minor, and "Distributing, transporting, exhibiting, receiving, selling, purchasing, electronically transmitting, possessing or exchanging any visual depiction in which a minor is engaged in exploitive exhibition" is a felony. If you run a library in Phoenix, you might want to consult a lawyer if you want to add certain British newspapers to your microfilm collection.

Whatever the models' ages, the idea that a major paper would regularly run topless shots sounds pretty weird on this side of the Atlantic. The fact that it did this while backing Thatcher sounds even weirder. But those cultural differences can be relegated to the history books now; The Sun doesn't run pictures of bare-breasted 16-year-olds anymore, and as of this week its photos of 18-year-old mammaries will appear only on the Web, where they're practically puritanical compared to some of the available alternatives. As a farewell to the era, here's an exchange from Yes, Prime Minister that one day only specialized historians will understand: