Cop Arrested for Refusing to Take Off Mask During Protest, Produce Identification, Claims to Be Part of Anonymous

A cop in Florida has some hobbies that trouble his supervisors 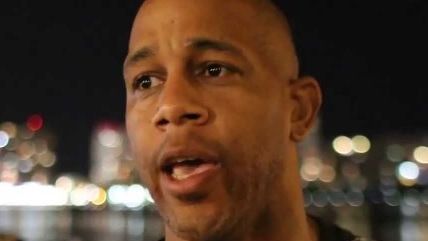 This would be just another free speech zone story were it not for the protester's occupation. The Sun-Sentinel reports:

Ericson Harrell, a police officer with North Miami Beach, said he was protesting Obamacare while standing on the sidewalk along South University Drive in Plantation on Nov. 22, 2013.

He was wearing a black cape and a Guy Fawkes mask seen in the movie "V for Vendetta" and holding a flagpole with an inverted U.S. flag in a one-man protest. The mask is symbolic of the group Anonymous.

Plantation police asked him repeatedly to remove his mask and produce some form of identification; Harrell refused. He identified himself only after officers found his gun. He was charged with obstruction of traffic and with wearing a hood or mask on a street, which defense attorneys said was created in 1951 to combat the Ku Klux Klan.

Internal affairs recommends Harrell be suspended without pay but is still finalizing disciplinary action. His self-identified association with the group Anonymous is also on police radar. Via the Sun Sentinel:

North Miami police found he violated three policies: conduct unbecoming an officer for using the agency computer for non-work matters and because he "ridiculed" the police chief on his Facebook page; for committing an act that could be considered a misdemeanor, regardless of whether he's charged; and for being part of an organization that could interfere with the agency.

Harrell is a member of the activist group Anonymous, whose decal is on his personal vehicle. Anonymous "wreaks havoc around the world to further its anti-government mission," according to the police report, which includes exploiting "government computer systems."

Because Harrell has security access to government computer databases, he was warned that associating with Anonymous could jeopardize his computer access and that he could lose his police certification, according to the report.

Harrell returned to work after his 2013 arrest and is still on the force. The department had been monitoring him at other protests before that arrest.