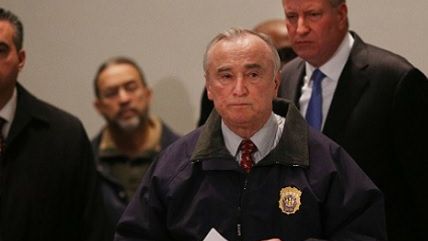 Given the perception promoted by police apologists that law enforcement officers operate in war zone-like conditions under constant threat of death, when a police officer is shot and killed it shouldn't be news. But the perception is incorrect—it's likely never been safer to be a cop—and so when cops are killed in the line of duty, it is big news.

In a somber press conference, New York City Police Commissioner William J. Bratton said the two officers were deliberately targeted because they were cops. He also acknowledged the danger officers take as part of the "thin blue line between us and anarchy."

"They were, quite simply, assassinated, targeted for their uniform and the responsibility they embraced," Bratton said. "Both were ambushed and murdered."

Bratton said the attacker approached the officers' vehicle from the passenger side and opened fire, shooting his weapon several times. The officers, Wenjin Liu and Raphael Ramos, "never had an opportunity to draw their weapons" and were "killed with no warning, no provocation," he said.

The killing appears indisputably unjustified, a clear act of aggression, that ought to be condemned. The alleged killer was found dead in the subway a short time later, reportedly from a self-inflicted gunshot wound. There's no bright side to this story.

And yet there's also no need to embellish what's already a horrible story. I disagree with the use of the word "assassination," which implies a political motive and a public figure, though I understand why Bratton would feel it applies, as cops are public figures. The alleged cop killer is also accused of killing his girlfriend in Maryland before heading to New York City. Police say they found statements revealing an  "anti-cop bias" on his Instagram but authorities are notorious for over-reading into suspects' social media posts*. The apparent suicide afterward suggests a fragile mental state, not someone motivated by a political agenda.

The word ambush is on even shakier ground. An ambush is executed from a hidden position, usually on a moving target. It's a word often used to make the bad, an assault, sound even worse, but it's not applicable here. A murder is a horrible thing. The lack of an ambush doesn't mitigate it.

Police apologists spend a lot of time belly-aching over "anti-cop invective" and broad generalizations of the violence police are capable of. A Cleveland Browns player wore a T-shirt calling for justice for two people killed by police in Ohio in questionable circumstances over the last few months and the police union wants an apology.  Questioning police tactics, asking for accountability, these things are treated as attacks on cops. So attacks on cops are treated like ambushes and cop killings like assassinations. Cooler heads need to prevail, or what'll happen if ambushes actually start happening? They did once in New York City, a long time ago. The two cops today, meanwhile, are the first to be fatally shot on the line of duty in New York since 2011.

UPDATE 2: Related: Here's a cop in Jersey City, Melvin Santiago, who was ambushed and killed by a man who went out with the specific goal of killing a cop. Jersey City's leaders didn't call his murder an assassination, and they didn't call his killer, who specifically went out to kill a cop,  "anti-cop," because this happened in July, before Ferguson and then Eric Garner helped propel the issue of police tactics and use of force to the national stage. The killing of Santiago was no less criminal because Jersey City's leaders didn't call it an assassination. And it had as little to do with the people involved in the wider effort to reform police as the killing of the two New York City cops does. The only difference is the country's paying attention to police issues, for now, in a way it didn't just half a year ago.