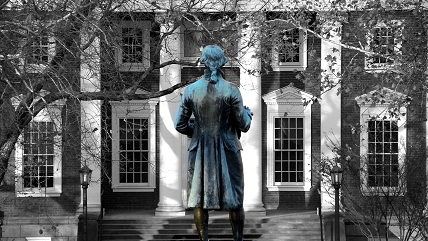 The Washington Post just published another investigative report on the University of Virginia gang rape allegations—and whatever credibility Sabrina Rubin Erdely and Rolling Stone had left is totally obliterated.

WaPost spoke with the three friends who rescued Jackie after her alleged gang rape on September 28, 2012. The details they provided depart significantly from Jackie's narrative as reported by Erdely. The friends told WaPost that Jackie did not appear battered or bloodied and gave a description of the attack significantly different than what was later published in Rolling Stone. They also clarified that it was Jackie who didn't want to go to the police, not them:

The scene with her friends was pivotal in the article, as it alleged that the friends were callously apathetic about a beaten, bloodied, injured classmate reporting a brutal gang rape at the Phi Kappa Psi fraternity. The account alleged that the students worried about the effect it might have on their social status, how it might reflect on Jackie during the rest of her collegiate career, and how they suggested not reporting it. It set up the article's theme: That U-Va. has a culture that is indifferent to rape.

"It didn't happen that way at all," Andy said.

Instead, the friends remember being shocked. Though they did not notice any blood or visible injuries, they said they immediately urged Jackie to speak to police and insisted that they find her help. Instead, they said, Jackie declined and asked to be taken back to her dorm room. They went with her — two of them said they spent the night — seeking to comfort Jackie in what appeared to be a moment of extreme turmoil.

Erdely portrayed Jackie's friends as popularity-obsessed sociopaths who deterred her from reporting the assault. They say that's not true; it was Jackie who didn't want to report it.

That may seem damning, but it's just the beginning. According to the friends, Jackie did name her attacker, but no one by that name attended UVA. Pictures of the attacker—the man Jackie claimed was a UVA junior who had asked her out on a date—that she provided to the friends were actually pictures of a former high school classmate who never attended UVA and "hasn't been to Charlottesville in at least six years." His name is not the one Jackie gave her friends. These details were all verified by WaPost.

Here's the timeline, according to the friends:

The three friends said that Jackie soon began talking about a handsome junior from chemistry class who had a crush on her and had been asking her out on dates.

Intrigued, Jackie's friends got his phone number from her and began exchanging text messages with the mysterious upperclassman. He then raved to them about "this super smart hot," freshman who shared his love of the band Coheed and Cambria, according to the texts, which were provided to The Post. …

Jackie told her three friends that she accepted the upperclassman's invitation for a dinner date on Friday Sept. 28, 2012.

U-Va. officials told The Post that no student by the name Jackie provided to her friends as her date and attacker in 2012 had ever enrolled at the university. Randall provided The Post with pictures that Jackie's purported date had sent of himself by text message in 2012.

The Post identified the person in the pictures and learned that his name does not match the one Jackie provided to friends in 2012. In an interview, the man said that he was Jackie's high school classmate but that he "never really spoke to her."

If the friends' narrative is accurate, it seems doubtful that "Drew" exists at all, and is instead the product of some kind of catfishing situation. Compare that with Rolling Stone editor Sean Woods' initial claim that "I'm satisfied that [the perpetrators] exist and are real. We knew who they were."

One of the friends, "Randall," also told WaPost that Erdely lied when she wrote that he declined to be interviewed because of "loyalty to his own frat." Randall said he would have gladly given an interview but was never contacted.

The friends quoted in the latest article still say Jackie's changed behavior that first semester is evidence of some trauma she sustained. That may be true, although it is difficult to say what, exactly, that might have entailed. There is not a shred of evidence to suggest such a trauma bears any resemblance to the incredible story told by Rolling Stone.

Lest anyone think that this debacle is solely the fault of someone who falsely claimed rape, keep in mind that these fraudulent charges were put forth by a national magazine that made no effort to verify them, and ignored every red flag in its haste to publish the story of the century—even when Jackie refused to name her attackers and attempted to withdraw her story. Whatever the truth is—whatever the excellent reporters at WaPost manage to uncover next—the fact remains that Rolling Stone and Erdely should have known better.

The degree to which everyone involved in this travesty of journalism failed at their jobs is almost unbelievable. But unlike the story of a gang rape at UVA, we now have incontrovertible proof of it.

More from me on this subject here.