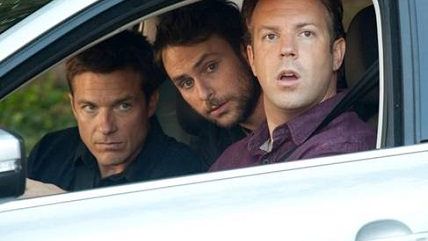 The original Horrible Bosses, released in 2011, grossed more than $200-million worldwide. Because of this—and only because of this, I'd guess—we now have Horrible Bosses 2. The first film, lit up by the comic chemistry of Jason Bateman, Jason Sudeikis and Charlie Day, was very funny. It had a tight, lightweight script and prime support by Kevin Spacey and (especially) Jennifer Aniston as two of the awful bosses. They're all back for the sequel, and they're all fine—or as fine as the rickety script will allow them to be. But the premise is already played out, and the scattershot fun is strained.

The story naturally picks up from the end of the first movie. Nick (Bateman), Kurt (Sudeikis), and Dale (Day), now liberated from their oppressive employers, are striking out on their own. In search of financial backing to manufacture a bathroom gadget they've invented—the Shower Buddy—they approach a marketing mogul named Hanson (Christoph Waltz). Hanson agrees to fund the creation of their new company and also places a huge initial order for their dopey product. But then he turns around and screws them, leaving the guys swamped in debt. Seeking counsel from their former "murder consultant," Motherfucker Jones (Jamie Foxx, also returning from the first film), the guys decide to kidnap Hanson's whack-job son, Rex (Chris Pine), and hold him for a substantial ransom that will bail out their fledgling business venture.

It's still a pleasure to watch Bateman, Sudeikis and Day playing off each other. They're so completely in sync, you keep hoping they'll goose the movie into takeoff. But the killer lines they've been given here never quite kill—they're often slightly askew. Preparing for a TV interview with two airhead morning-show hosts, Nick says, "Let's not be ourselves. Ourselves is a dumpster fire." Later, when they're interviewing job applicants for their new company and Kurt keeps choosing hot chicks with otherwise blank resumes, he says, "What's the point of being the boss if you can't stock the pond a little?"

The funniest new addition to the cast is Pine, who has a vivid gift for halfwit comedy. (Rex wants to scam the Shower Buddy guys, but he turns out to be even stupider than they are.) And Foxx is still amusing in his peripheral thug role. (It turns out his Motherfucker Jones never actually murdered anyone—he went down for pirating copies of Snow Falling on Cedars.)

But Waltz is wasted as the heartless Hanson—he's too congenial to pass for sinister. And Spacey and Aniston are woefully underserved by the script (cowritten by new director Sean Anders, who also had a hand in Dumb and Dumber To). Spacey, as Nick's onetime boss Dave Harken, is given only a couple of pointless rants in a prison visiting room (he really did murder someone in the first film). And Aniston, as the nymphomaniac dentist Julia Harris, is marooned here. Last time out, with her slinky moves and dirty-girl wisecracks, she was a hilarious raunch goddess. Here she's saddled with an arsenal of overcooked trash talk that's too witless to be much fun. ("I collect cocks," she says.)

There's no non-monetary reason for this picture to exist. It's padded and meandering, and there aren't even any horrible bosses in it. It's hard to imagine fans of the first movie not laughing a lot less at this one.