The Hunger Games: Mockingjay – Part 1 and A Girl Walks Home Alone at Night

Jennifer Lawrence in a disappointing half-movie, a vampire in the Iranian wild west. 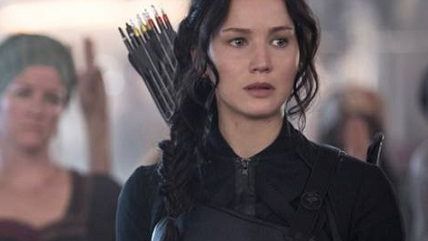 The new Hunger Games film might have been a pretty good war movie, if there were an actual war in it. But there's not. Suzanne Collins' Mockingjay, the concluding novel in her Hunger Games trilogy, tells the story of an uprising by the citizens of Panem against the tyrannical President Snow. However, in the manner of the Harry Potter and Twilight franchises, the screen version of Collins' book has been stretched, for purposes of profit-maximization, into two movies. And so The Hunger Games: Mockingjay – Part 1 is essentially a prequel to the presumably more exciting wrapup still to come in Part 2. Although Mockingjay was filmed as one long picture, that second installment won't be released for another year. So when this movie comes to an end—or just stops, actually—in the midst of an emotionally fraught scene, we're not tantalized so much as simply annoyed.

You'll recall that at the end of the last movie, Catching Fire, Katniss Everdeen (Jennifer Lawrence), the beloved kickass of the brutal Hunger Games overseen by Snow (Donald Sutherland), was being flown out of the Quarter Quell arena to the rebel stronghold of District 13. Now she has arrived, and the rebel leader, President Coin (Julianne Moore), and turncoat Games designer Plutarch Heavensbee (the late Philip Seymour Hoffman) have big plans for her: they want to use Katniss as the face of their revolution. To this end, she is assigned a video film crew and a punked-out director named Cressida (the series' best new character, played by Natalie Dormer), who take her out into the ruins of the various Districts to shoot rebel-rousing TV propaganda spots.

There's quite a bit of this on-location filmmaking, with the result that the story's visual palette—once enlivened by the colorful decadence of the Capitol—is muffled into drab expanses of smoking rubble and sprawling skeleton fields. And the story's most enjoyably flamboyant characters have been similarly reduced. The bizarre wardrobe of Stanley Tucci's manic game-show host, Caesar Flickerman, has been seriously dialed down; and ditzy fashion victim Effie Trinket (Elizabeth Banks), now also resident in District 13, mourns the loss of her wigs and glitter, and deplores the general dearth of style in her new surroundings. ("I am condemned to this life of jumpsuits," she says.) None of this is a lot of fun to look at.

Meanwhile, Katniss spends much of her time fretting about her quasi-boyfriend and Games partner Peeta Mellark (Josh Hutcherson), who's still being held in the Capitol (where he appears to have sold out to the government side). This plot point is a problem the movie can't resolve. As has been the case throughout the franchise, we can't understand why Katniss would be in any way interested in the bland and anti-sexy Peeta when her old friend Gale (Liam Hemsworth)—a classic sensitive hunk—is so clearly available to take his place. In addition, Katniss' concern for Peeta results in her spending quite a bit of the movie in po-faced mopery. She rouses herself for some pretty exciting action scenes—shooting an enemy fighter jet out of the sky with her high-tech bow and arrow at one point—but the warrior girl of the first two films, so formidable in the vicious Hunger Games battles, is little in evidence.

Returning director Francis Lawrence can't be blamed for the movie's chief structural flaw—the decision to hack one film into two—and he constructs at least one memorable sequence: a rebel rescue mission that's staged like an outtake from Zero Dark Thirty. The cast is still filled with fine actors, and they don't condescend to the pop-blockbuster material. But it's depressing to see Jennifer Lawrence, a stirring action hero in the previous films, so diminished here. And it's too bad that some of the series' best performers—especially Tucci and Banks, and Woody Harrelson as Katniss' mentor Haymitch Abernathy—have been confined to what are basically cameo appearances. Saddest of all is the trivial use of Hoffman, who's wasted once again in this final role of his career (he died during filming).

The movie is a pre-sold hit (the first two films grossed more than $1.5-billion dollars worldwide). But it might have been a more gratifying experience had it been presented, along with its forthcoming sequel, as a single three-hour film. Even the most devoted Hunger Games fans may walk away from this awkward installment still hungry for more than it delivers.

This Sundance hit is billed as "the first Iranian vampire western," but that's a little misleading. The picture is a horror-movie first, of sorts: there's a skateboarding vampire, for one thing, and a lively electro-pop score. The characters are pimps and prostitutes and drug addicts, and one of them drives a vintage Thunderbird convertible. Could all of this really be happening in Iran?

Well, no. The actors are either Iranian or Iranian-American, and they do speak in subtitled Farsi. But director Ana Lily Amirpour, who also wrote and edited the picture, was born in England and raised in Bakersfield, California; and the "Iranian" town in which her story is set—"Bad City," she's called it—is actually not far from Bakersfield. Here we see a James-Dean-like young man named Arash (Arash Marandi) and his junkie dad (Marshall Manesh, from How I Met Your Mother) running afoul of the town's drug-dealing pimp (Dominic Rains), who in turn delights in making life hellish for a hooker named Atti (Mozhan Marnò). Shadowing these characters is a mysterious woman (Sheila Vand) who glides through the night in a chador (which strikingly suggests a traditional vampire's cape) in search of love or blood, whichever offers itself first.

There's not much more to the story than that, but as filmed by Lyle Vincent (in beautiful high-contrast black-and-white), it has a dreamlike pull. The movie is a fresh vision, but it also seems to be the sum of the director's many influences, from the spaghetti-western guitars of Ennio Morricone and the lurid oil pumpjacks of Kathryn Bigelow's Near Dark to the deadpan glumness of Jim Jarmusch and David Lynch (whose longtime sound designer, the late Alan Splet, is saluted in the film's industrial soundtrack rumblings). The film feels a little long, even at 99 minutes, but it's an impressive debut. And assuming that Amirpour can subsume all of her obvious influences into a personal style, it'll be really interesting to see what she comes up with next.