Little Boy Suspended for Pointing Finger Like a Laser Gun

The school considered it a threat. 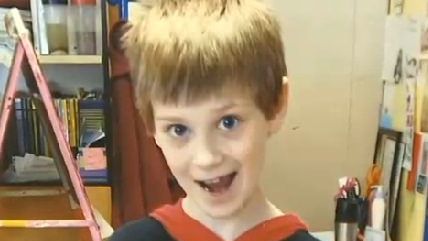 Stacy Middle School in Milford, Massachusetts, took steps to neutralize a dangerous public nuisance: 10-year-old Nickolas Taylor, who had threatened some of his classmates with his weapon of choice while cutting in line.

That weapon is an imaginary laser gun, which he conjured into existence by pointing his finger and uttering laser noises. Quick, get this maniac away from other kids before he disintegrates them with his mind!

Thankfully, school officials intervened and suspended the aspiring sci-fi villain, according to whdh.com:

"It was absolutely ridiculous. Nickolas is a sweet little boy that was just standing in line at lunch playing with his hands," Linda O'Brien, the boy's grandmother, said.

The actions were taken very seriously at Milford's Stacy Middle School where the boy is a student.

The assistant principal sent Nickolas Taylor's dad a note explaining because Nickolas pointed a gun "made from his hand" at two girls in a lunch line and then blew on his fingers as if to cool off the gun barrel its considered "a threat".

Okay, back to reality. The principal thought thus constituted a threat? Really? How paranoid of gun violence do you have to be to consider an imaginary ray gun some kind of threat against other students?

Administrators should have told Taylor to behave himself in the lunch room and save the pretend target practice for recess. That's all. But not only did they punish him, they suspended him. He had to wait two days for school authorities to mellow out and let him return to class. I wonder how much trouble a kid could get into for attempting to use something more dangerous on his classmates, like, say, Force lightning? (Note to principals: That's not a challenge.)

Reason readers know that kids are routinely punished by unimaginative adult bullies for engaging in harmless fun. Consider the teen who was disciplined for writing a story in which he shot a dinosaur with a gun.

For too many kids, public school is where fun goes to die. Even if it doesn't get blasted by an imaginary destruction ray.

At least things might get better for Taylor now. His parents told local reporters that they plan to home school him.