If You Liked the Peace and Stability of Henry Kissinger's Foreign Policy, Vote Hillary Clinton in 2016!

The horrific failures of our bipartisan foreign policy establishment. 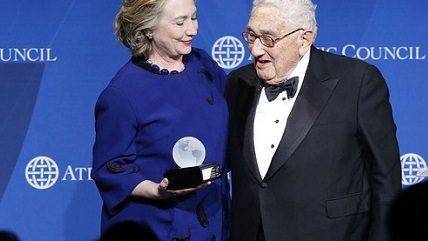 It says a lot about former secretary of state and presumed presidential aspirant Hillary Clinton that she's a member of the Henry Kissinger Fan Club. Progressives who despised George W. Bush might want to examine any warm, fuzzy feelings they harbor for Clinton.

She has made no effort to hide her admiration for Kissinger and his geopolitical views. Now she lays it all out clearly in a Washington Post review of his latest book, World Order.

Clinton acknowledges differences with Kissinger, but apparently these do not keep her from saying that "his analysis … largely fits with the broad strategy behind the Obama administration's effort over the past six years to build a global architecture of security and cooperation for the 21st century."

Beware of politicians and courtiers who issue solemn declarations about building global architectures. To them the rest of us are mere "pieces upon a chess-board." Security and cooperation are always the announced ends, yet the ostensible beneficiaries usually come to grief. Look where such poseurs have been most active: the Middle East, North Africa, Ukraine. As they say about lawyers, if we didn't have so-called statesmen, we wouldn't need them.

If I didn't know better, I'd suspect some pseudonymous writer of having fun with irony in this review. Behold:

President Obama explained the overarching challenge we faced in his Nobel lecture in December 2009. After World War II, he said, "America led the world in constructing an architecture to keep the peace.…"

Keep the peace — if you don't count the mass atrocity that was the Vietnam War, the U.S.-sponsored Israeli oppression of Palestinians, and various massacres carried out by U.S.-backed "leaders" in such places as Bangladesh (formerly East Pakistan), East Timor, Chile, and elsewhere.

One Henry Kissinger had a hand in all these crimes, by the way. Strangely, Clinton doesn't mention them.

America, at its best, is a problem-?solving nation.

Iraq, Syria, Afghanistan, and Libya are only the latest examples of problems America solved during Madam Secretary's tenure, building on the glorious successes of George W. Bush's team. Henry the K is no doubt flattered by the homage.

Kissinger is a friend, and I relied on his counsel when I served as secretary of state. He checked in with me regularly, sharing astute observations about foreign leaders and sending me written reports on his travels.

Now things make sense. That Hillary Clinton thought Kissinger — Henry Kissinger — a worthy advisor is something we should all know as 2016 looms.

What comes through clearly in this new book is a conviction that we, and President Obama, share: a belief in the indispensability of continued American leadership in service of a just and liberal order.

There really is no viable alternative. No other nation can bring together the necessary coalitions and provide the necessary capabilities to meet today's complex global threats. But this leadership is not a birthright; it is a responsibility that must be assumed with determination and humility by each generation.

It takes chutzpah to write humility even remotely in connection with Kissinger. And if the U.S. empire is indispensable to justice and liberalism — and where are these, exactly? — we are in trouble. The record is not encouraging. Kissingerian "realism" creates global threats.

The things that make us who we are as a nation — our diverse and open society, our devotion to human rights and democratic values — give us a singular advantage in building a future in which the forces of freedom and cooperation prevail over those of division, dictatorship and destruction.

Devotion to human rights and democratic values — as shown in Egypt, where Clinton stuck by another friend, Hosni Mubarak, against a popular uprising. The woman has some friends!

"Any system of world order, to be sustainable, must be accepted as just — not only by leaders, but also by citizens," he writes.

The suggestion that Kissinger cares what ordinary citizens anywhere think is ridiculous. What he cares about is states, which he puts in one of two categories: those that buckle under to the Indispensable Empire and those that do not.