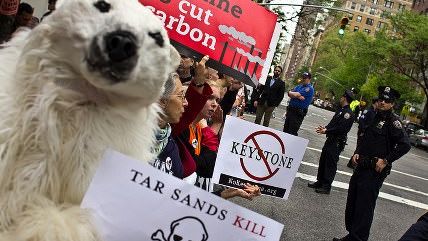 As predicted earlier in the day, embattled Democratic Sen. Mary Landrieu of Louisiana was unable to get enough votes to push Keystone XL pipeline construction support through the Senate. It came up one vote short. From USA Today:

Landrieu, the lead Democratic sponsor of the bill, is locked in a Dec. 6 runoff against GOP Rep. Bill Cassidy. The pipeline vote has become a political issue in the race, where the state's oil and gas industry is supportive of the pipeline's construction. The proposed crude-oil pipeline would run nearly 1,200 miles from Canada to the Gulf Coast.

Both lawmakers are using the pipeline vote to flex their legislative muscle and clout on Capitol Hill ahead of the runoff. "The race is not over in Louisiana. She has not given up, we have not given up on her behalf," said Senate Majority Leader Harry Reid, D-Nev.

Landrieu was confident she could secure the 60 votes necessary to pass the bill, but public vote counts had the bill stalled at 59 votes Tuesday afternoon. "I don't expect it to fail," Reid said, cautioning: "I don't know what's going to happen."

The House passed mirror legislation last week, sponsored by Cassidy, who is favored to win the Senate race because of the conservative lean of the state.

It will, of course, come up again in the next Senate next term and will almost certainly pass. Whether Landrieu will be there to try to push it through again is another question.

A reminder: A majority of Americans support building the pipeline.