Obama Immigration Plan: Won't Know What's In It Till He Announces It, Or Maybe Not Even Then 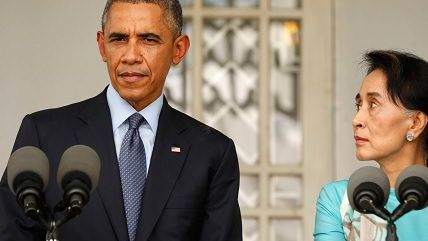 In a joint conference yesterday in authoritarian Myanmar with long time dissident Aung San Suu Kyi, President Obama said he would institute immigration reforms via executive order, as he said he warned House Republicans he'd do all year if they didn't pass a bill he supported. Despite the bizarre choice of venue to thumb his nose at the opposition, the president's actions on immigration could help bring millions of people living and working in the U.S. out of extralegal status.

Fox News reports that a draft proposal of the plan included, surprise!, raises for immigration officers and more border control measures, but also "deferred" status for millions of illegal immigrants, including up to 4.5 million adults who have children who were born in the United States as well as children and young adults (and possibly adults?) who came to the country illegally as children. Those with deferred status would be able to receive work permits, Social Security numbers, and government identification.

The plan as sketched in the draft proposal reported on by Fox News is probably at the upper limit of what President Obama will eventually announce. It could be a lot less. Though the raises and at least lip service to border control seem assured, how many people will be allowed access to legal status is less certain. More spending on the government bureaucracy, on the other hand, could be used to curry more support for the reforms that matter, those that can expand legal status for illegal immigrants living in the U.S.

The White House has also began to point at executive action taken by Presidents Ronald Reagan and George H.W. Bush around a series of immigration legislation in the late-1980s. In one instance executive action closed a loophole left in the 1986 immigration bill dealing with amnesty for children whose parents received amnesty. The other, the White House says, preceded eventual Congressional action but came after the Senate passed a related immigration bill and the House didn't.

Republicans will take control of the House and Senate next year. The president is expected to announce his plan on executive action for immigration by the end of the week, but it doesn't mean that's when any executive action will happen. Even executive orders from a White House heavy on rhetoric (remember the Guantanamo Bay EO?) don't guarantee any change in the situation on the ground. At the end of President George W. Bush's second term, attempts at immigration reform failed as potential candidates for president ranging from Rep. Tom Tancredo (R-Co.) to then-Sen. Barack Obama (D-Ill.) did their best to scuttle the efforts. How the next presidential election will affect current efforts to reform the immigration system depends on the cut of this batch of candidates. It's hard to hold your breath.