Virginia Tech: YAF Violated 'Principle of the Common Humanity,' So No More Funding 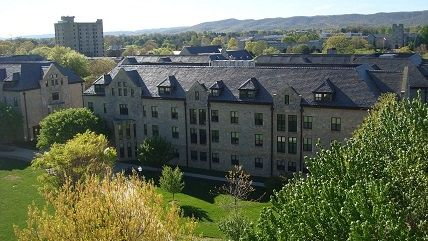 The Young Americans for Freedom chapter at Virginia Tech stands accused of violating the university's "Principles of Community"—specifically, the "principle of the common humanity"—because it hosted an event about illegal immigration.

YAF won't receive any more funding from the public university, according to Campus Reform.

The conservative student group invited former U.S. Treasurer Bay Buchanan to speak at the campus. YAF promoted her talk with flyers and advertising that used the title, "Alien Invasion: How Illegal Immigration is Hurting America."

A Latino student group was offended. So was the Student Budget Board, which allocates funds produced by compulsory student fees to various campus organizations. Campus Reform reports:

Since then, Lauren McCue, chair of Va. Tech's YAF chapter, has said the Student Budget Board has told her that her club will not be receiving funding for the next two semesters as the immigration event "violated the principles of community." …

Mark Owczarski, a university spokesman, told Campus Reform that the decision to pull funding from the group was "entirely in the hands of students and based on their internal policy."

Owczarski said the Student Budget Board felt "misled" by Va. Tech's YAF chapter as it was given funding to "support a leadership development program" whereas the group "mounted a program on immigration policies with Bay Buchanan as speaker" instead.

"University administrators were not involved in the student decision making, other than to advise the [Student Budget Board] not to take actions based on the content of a program," Owczarski said in the statement. "Rather, [the Student Budget Board] felt deceived by YAF and elected to act on their policy to deny future funding based on policy guidance."

YAF maintains that the Buchanan event was indeed a leadership development program—just not one that aligned with the budget committee's political views. Note that the university seems perfectly aware that denying funding to a student group for ideological reasons violates the First Amendment; as such, administrators must try to find some other rationale for the unconstitutional actions of student leaders.

"I'm disappointed in Virginia Tech for being intolerant toward conservatives," McCue told YAF in a statement. "I feel discriminated against for speaking my mind and standing up for what I believe in as the chairwoman of my Young Americans for Freedom chapter."

If McCue truly and deliberately misled the budget committee about how she planned to use the funding, it may be the case that the decision was fair. Otherwise, this is certainly political discrimination. Given that the students in charge of allocating the money seem to think that merely entertaining a dissenting view on an important public policy topic is offensive to the principle of common humanity at an institution of higher learning, I'm betting on the latter.