Law Says One Thing, Child Services Says Another: Don't Let Your Kid Outside 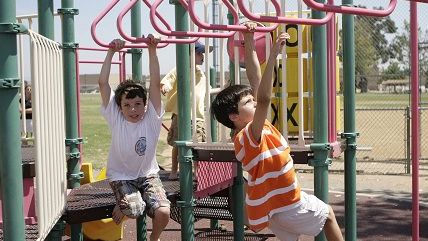 The government loves your kids more than you do. Or so it seems to believe. How else to explain a government worker visiting a Maryland mom and threatening her with a fine and jail time for letting her kids play outside? Here's a letter she wrote me describing the terrible child abuse she committed:

I thought you might find this interesting: I was just visited by two representatives of Montgomery County Child Welfare Services because a "helpful" neighbor called them about my children who were at the park on Monday afternoon 10/27 without an adult.

These reps told me that Maryland law prohibits me from allowing my six-year old to go to the park, which is two blocks away in a residential neighborhood, with her 10-year old brother but no adult.

This is not true.

And so, she continued in her note to me:

The way I see it, "locked or confined in a dwelling, building, enclosure, or motor vehicle" does NOT include a neighborhood park and this statute does not preclude me from sending my six-year old there with her brother. Therefore, I will continue to do so.

Then this ballsy mom called up the child services rep to point out the difference between "playing outside" and "locked or confined." The rep actually called back to tell her that:

…[J]udges have interpreted the law to include parks—in spite of the fact that the language is VERY clear about enclosed spaces—so a cop could charge us $500, or a judge could give us 30 days in jail, if my daughter is without supervision at the park.

The mom wants her children to have fresh air, fun, exercise and independence. She trusts her kids, her neighborhood, and her own parenting. The state, apparently, does not. And it believes things would be better for the children if mom was locked up in jail for a month.

I will keep you posted as to what happens next.