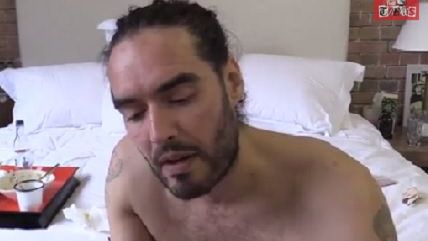 Professional idiot comedian Russell Brand has a new book out, Revolution, pimping his half-baked ideas about an anti-capitalist revolution. Michael Moynihan (Reason contributing editor) read it for The Daily Beast, and dismissed it for its mistakes and misquotes and for being unfunny and unreadable. He pulled one choice quote to show what Brand's writing is like:

"This attitude of churlish indifference seems like nerdish deference contrasted with the belligerent antipathy of the indigenous farm folk, who regard the hippie-dippie interlopers, the denizens of the shimmering tit temples, as one fey step away from transvestites."

That quote, in turn, was used to create a meme where Brand's verbosity is interrupted by "PARKLIFE!", a reference to a 1994 Blur song. Buzzfeed explains it, and catches Brand's response to his criticism, via Twitter: "It's weird how highly paid, privately educated journalists who work for the corporate media attack my book Revolution."

Russell Brand is reportedly worth around $15 million, the kind of money his ideology says is "hoarded" when it's all in one place or one person. Nevertheless his book, Revolution, an anti-capitalist screed, is available for sale at capitalist enterprises like Amazon. Despite the possibility in 2014 to release a manifesto like Brand's at no cost to the reader over the internet—and Brand's fame would guarantee a wide audience—Brand chose the more traditionally capitalist route of charging good money for his book. It's his right in a market we would deem free, but it wouldn't be in the kind of market Brand would impose on the rest of us. Weird indeed.