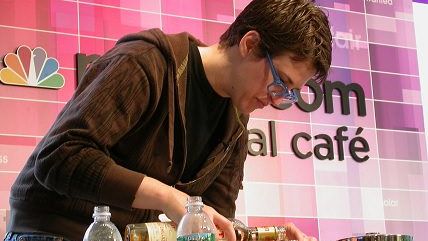 MSNBC talking head and relentless Democratic partisan Rachel Maddow just suggested marijuana legalization as one issue with a clear partisan breakdown. Did you know Democrats are pro-pot and would surely legalize it if only those pesky Republicans would let them?

To be fair, it is true that more Democrats support marijuana legalization than Republicans. But long-time readers of Reason know that it's quite a bit more complicated than that. Younger voters by-and-large support legal weed, regardles of their party affiliation. Medical marijuana is increasingly supported by Republicans; those in the conservative fold are also more and more likely to favor letting states set their own drug policies rather than be bound by federal government mandates. And while rank-and-file Democrats are indeed more enlightened on pot than their Republican counterparts, national Democratic leaders—including the one currently occupying the White House—have done very little to honor their base's desire for less restrictive drug laws.

In fact, there is little doubt that Sen. Rand Paul, a frontrunner for the Republican presidential nomination in 2016, supports a more sane approach to drug policy than does Hillary Clinton, the likely Democratic presidential nominee. Just today, Paul said that if D.C. voters wanted to legalize marijuana they were welcome to do so.

Bottom line: Support for drug decriminalization is rising on the right, and some Republican leaders are taking initiative on the issue. To be sure, many Republicans remain hopeless drug warriors, but so do many Democrats. If Maddow wants to recast the growing left-right consensus on the insanity of marijuana prohibition as some kind of partisan thing… well, maybe her viewers like that sort of analysis, but it's cynical and dubious.