Man Gets Stabbed on Subway. Guess How Helpful the Cops Were. 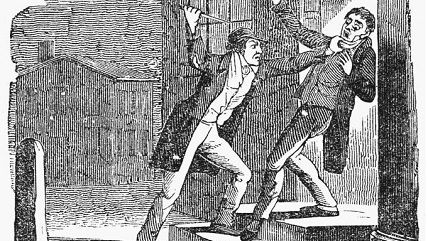 Joe Lozito, a Philadelphia resident and stabbing victim, shared his unforgettable story with Cracked.com. Lozito encountered Maksim Gelman—a deranged spree killer—on a New York City subway train on February 12, 2011. Gelman stabbed Lozito in the face with a knife; though grievously wounded, Lozito was able to subdue Gelman. Then the police appeared and made the arrest.

But Lozito explained to Cracked.com that the cops were present all along, hiding behind a door during the fight to the death, because they were too afraid to confront the stabber until he had been defeated:

That creepy guy—who I'd later learn was Gelman—started banging on the door of the engineer's compartment. I was sitting right by the door. The only thing separating the engineer and myself was a wall. "Let me in," the crazy person said, crazily.

It turned out there were two cops on the other side of the door, lying in wait in case Gelman hopped on this train. I found out later they'd recognized him, but they didn't charge out to stop him. Instead they asked, "Who are you?"

Gelman backed away from the door and started pacing the car. The cops stayed put, because, as the rest of this story will make clear, they weren't very good cops.

The next thing I remember is a cop tapping me on the shoulder.

I felt like "we" was being a little charitable. Ever have one of those "team projects" that you end up carrying all by yourself while your partners play iPhone games? It was sort of like that, only if the project was repeatedly stabbing you in the face and head. The cops didn't come out of their compartment at all until Gelman was on the ground and de-knifed.

Neither Lozito nor the passenger who administered emergency medical assistance to him received much credit; instead, the police were hailed as heroes. But that account didn't sit right with a member of the grand jury who heard the case. This man later tracked down Lozito and explained just how cowardly the cops had acted:

I asked him to prove he was on the grand jury, and he described pictures of my injuries that were released only during the hearing. That was enough for me. He went on to explain: "When you left, they interviewed the male officer. He testified that he'd watched the whole thing, and he was about to come out. 'I started to come out, I opened the door, but I thought Gelman had a gun, so I closed the door and stayed inside.'"

Lozito eventually decided to sue the NYPD for failing to protect him. He lost that suit because the cops have "no constitutional duty" to protect people:

Turns out it is much easier knife-fighting a maniac on a train than it is law-fighting the police in court. Thanks to the 2005 Supreme Court ruling that the police have no constitutional duty to protect people from harm, Lozito's case was dropped again. We just want to stress this: they won on the grounds that the NYPD are under no obligation to protect a man being stabbed to death right in front of them. But the judge who dismissed Lozito's case was sympathetic. She said his version of the events "ring true" and appear "highly credible."

Citizens, be warned: If you ever find yourself confronting a knife-wielding maniac in New York City, you're on your own.