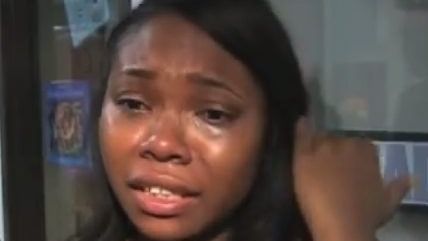 More "zero tolerance" injustice, this time from the Dearborn Heights school district in Detroit, Michigan. Atiya Haynes, an honors students and college-bound 17-year-old, was emerging from the bathroom at a high school football game when school officials decided to search her. (It's not clear why this was done, but I take it that such searches are merely routine at school events—in other words, there was no specific suspicion that Haynes had done something wrong.)

Officials found a pocketknife in Haynes' purse. She told them she had forgotten that she was carrying the knife, which was a gift from her grandfather. In a sane world, it would be completely reasonable for her to carry a pocketknife for protection; she biked long distances across southwest Detroit to get to her job last summer, for instance.

But because it is illegal to carry any weapon on school grounds for any reason—even with good reason, or by accident—she was promptly expelled. The Board of Education eventually relented, but only slightly: Haynes is still suspended for the rest of the year, but will be able to take online classes and graduate. That's hardly an improvement, given that Haynes is actively involved in extracurricular activities at her school.

Understandably, Haynes was not satisfied with the final verdict, according to The Detroit News:

"I'm disgusted," she said. "I can't believe that … no empathy. Put your child in this situation. Every time you forget your keys to your house, think of me. Think of this honest mistake. I'm a human being. I'm 17 years old. It's disgusting that you can sleep at night knowing that you can potentially ruin somebody's life."

Haynes is the latest in a long line of kids whose bright futures were put on hold—if not ruined—by absurd, vindictive "zero tolerance" policies. And she certainly won't be the last.

Laws that criminalize harmless accidents and self-protection are not worth upholding.