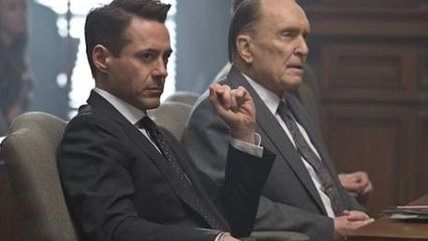 One of the several interesting things about Damien Chazelle's Whiplash, along with its combustible performances and the admirable clarity of its focus on complex music, writes Kurt Loder, is the moral ambiguity of its central characters. Andrew Neyman (Miles Teller), a first-year student at a New York music conservatory, seems like a nice kid, earnestly dedicated to mastering the art of jazz drumming. And while his instructor, Terence Fletcher (J.K. Simmons), at first appears to be a borderline sadist, we figure that his abrasive behavior must actually be a species of tough love, to be illuminated, in traditional movie fashion, by subsequent revelations in his backstory. Neither of these initial impressions is entirely accurate, though, and an unusually detailed examination of the musicians' lives brings the characters and music to life. Loder also reviews The Judge starring Robert Downey Jr. and Robert Duvall.