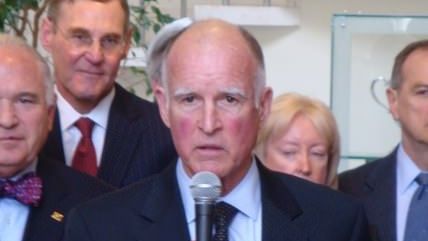 The Cato Institute today released a report grading governors across the country over their recent fiscal policies and how well they've tried to rein in taxes and spending. The good news, according to Cato experts Chris Edwards and Nicole Kaedig, is that "we are in the midst of the best tax-cutting run since the late 1990s."

The governors ranking at the top of the list of fiscal responsibility were all Republicans while the governors at the bottom were all Democrats. There were some Dems with pretty good scores, though, like Lincoln Chaffee of Rhode Island and Andrew Cuomo of New York, both of whom have worked to make their tax environments more friendly and competitive for businesses.

Ranking dead last on the list, and it's not even really close, is California Gov. Jerry Brown, who has pushed forward big tax increases and budget increases and still wants to throw billions of dollars at the boondoggle of a high-speed rail. He scores a mere 19 points out of 100. The four governors earning A's from Cato were Pat McCrory of North Carolina, Sam Brownback of Kansas, Paul LePage of Maine, and Mike Pence of Indiana, all Republicans. Cato's summary of the four:

The full report doesn't just touch on taxes and spending. It also analyzes some current fiscal issues states struggle with from ballooning Medicaid costs to massive unfunded pension liabilities (and the challenges of actually trying to put a number on the beast). The report also knocks how many states' versions of tax cuts are actually designed to favor certain selected industries over others (movie industry tax credits are smacked around) rather than making states more hospitable to all comers.

Take a look at the full report here. Scroll down to page 14 for governor-by-governor summaries.