Would You Trust the Post Office to Deliver You a Carton of Eggs? 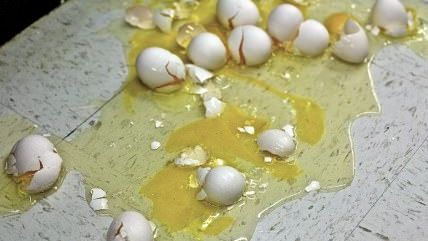 The latest desperate maneuver from our deficit-ridden United States Postal Service (almost $2 billion in losses last quarter) as it looks for a way to survive in a world that needs them less and less every day is to try to push their way into Amazon Fresh-style grocery deliveries.

The Postal Service has sent in a proposal asking for permission to start testing grocery delivery services to homes. From The Washington Post:

Under the plan, USPS would work with retail partners to deliver "groceries and other prepackaged goods" to homes between 3 a.m. and 7 a.m. at locations designated by consumers. Participating grocery stores would have to drop off their orders at post offices between 1:30 a.m. and 2:30 a.m.

To be fair to the post office, they actually do already assist Amazon in their grocery deliveries in the San Francisco area. But if you believe that one of the roles of government is to provide valuable services that the private sector cannot manage for itself, you'd be hard-pressed to explain why we need their help. Instead it looks like they're attempting to participate in a marketplace that is competitive and growing and doesn't require a government participant. Google entered the same-day delivery market last year in a couple of major cities.

In the postal service's proposal, they even note that they're stepping into an existing market: "Grocery deliveries are expanding across the nation, with several different types of companies beginning to offer this service in recent months." That means the post office needs to stay far, far away from it. The involvement of the USPS may generate some revenue for them (and I'm betting a round of new hires) but it also puts a government agency into play for services that the private market is showing more and more it is able to handle on its own.

And in a totally unrelated story, a postal service employee was charged today with hoarding or refusing to deliver more than 40,000 pieces of mail in Brooklyn.