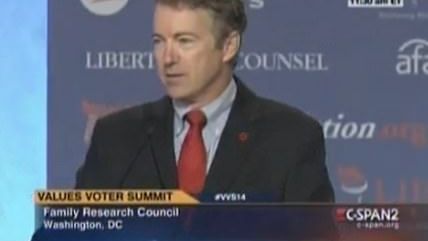 The annual Value Voters Summit, taking place right now in Washington, D.C., and hosted by the Family Research Council (FRC), gives Republican politicians the opportunity to fire up the party's social conservatives with a heaping helping of red meat.

Senators Ted Cruz (Texas) and Rand Paul (Kentucky), both potential (I suppose "likely" would be more accurate) presidential candidates for 2016, gave big speeches today focusing on religious liberty for Christians, both abroad and at home. The big targets were Muslim radicals and governments who were attacking Christians in the Middle East, and Obamacare for attempting to force Christian-owned businesses to fund birth control options that they find immoral.

Left entirely out of both men's speeches was any mention of opposing same-sex marriage, a major hobgoblin of the Family Research Council.  Cruz did say that Americans "stand for marriage" at one point, obviously sort of intended as a call to traditional values, but he went no further on the issue. According to the Associated Press, the "future of marriage" is the focus of a panel discussion there, and Tony Perkins, president of the FRC said that he thought that evangelical voters would still focus on issues like traditional marriage on Election Day.

It would silly to believe that Cruz and Paul are going to become major pro-gay-marriage conservatives. Cruz and Paul are both on the record as personally opposing same-sex marriage, but both prefer to leave the matter to the states. Paul would really like the GOP to kind of just leave it alone entirely, given that it's pretty much a settled issue for the growing millennial voting bloc, even for those who identify as Republicans. It's not a sign of a shift in belief that the two of them avoided one of the major issues the FRC exists to fight, but it may well be a sign that both realize it's not a position they can campaign on, even in front of a room of social conservatives.