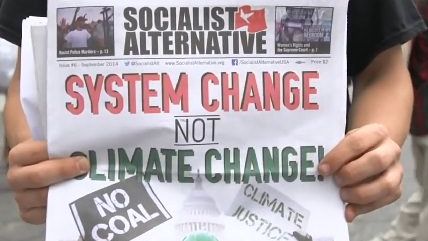 For some of the people in New York this week demanding action on global warming, the menace is not just carbon dioxide. The real Tyrannosaurus Rex is the American economic system. On Monday, the day after the huge march through Manhattan, a few hundred protesters showed up in the financial district for "Flood Wall Street." Their slogan: "Stop Capitalism. End the Climate Crisis."

One of them lamented to ThinkProgress that "not many people are willing to say that the root problem of climate change is capitalism." Another told The Daily Beast she was there "because I'm a Mashpee Wampanoag native to this country, and as far as I'm concerned, Wall Street greed has been killing me and my ancestors for 400 years."

It's not exactly clear how Wall Street greed was killing Native Americans in the 17th century, since the New York Stock Exchange didn't come into being until 1817. But leave that aside. What was obvious from the Monday protest is that the radical members of the movement against climate change have some serious misperceptions about economics and the environment.

It's true that there are corporations that profit from goods and services that contribute to global warming, from Exxon Mobil to General Motors to Duke Energy. But blaming capitalists for excessive carbon dioxide in the atmosphere is like blaming grocery stores for obesity. In each case, the business is taking its cue from what consumers want.