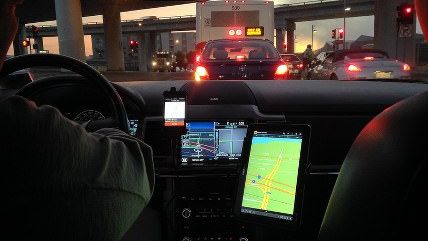 Today WAMU in Washington, D.C., explored its taxi scene in the wake of the establishment of ridesharing services like UberX and Lyft. Though the district's taxi commission claims they're not seeing any sort of shift, actual taxi companies told WAMU they're seeing customer drops of 20 to 30 percent. Some cab companies are reporting even higher plunges.

This information follows reports out of San Francisco that their taxi industry has seen a 65 percent decline in calls per month compared to 2012.

Per the San Francisco Examiner, their fair city is considering that maybe, possibly their taxi services are overregulated and maybe need to change so it's not so costly to legally be a cab driver there:

In an effort to boost incentives for drivers to join and stay in the taxi industry, the SFMTA waived dispatch renewal, color scheme renewal and driver application fees for fiscal year 2014-15, reduced some medallion-use and renewal fees and eliminated metal-plate fees.

Other possible regulatory actions the transit agency has contemplated to make cab driving more financially attractive to drivers include reducing fees for medallions, which allow holders to operate taxis. Other ideas include reducing the fee to transfer medallions by 20 percent, eliminating the $500 ramp taxi medallion use fee, lowering the medallion renewal for transferrable medallion holders and allowing taxi wrap advertising.

In D.C., drivers still seem to be clinging to the mindset that the customers belong to them and that the problem is that ridesharing services are breaking the rules. They seem to think that the solution is more regulation, oblivious to the fact that the very regulations that drive up their prices are what is causing passengers to seek alternatives:

"I'm not sure the council knows how to regulate them," said [District Cab President Jeff] Schaeffer, who said the District should limit the number of "ridesharing" vehicles allowed on the streets.

Legislation being drafted by D.C. Council member Mary Cheh (D-Ward 3) is expected to require either "ridesharing" drivers or their companies to obtain primary commercial liability insurance for at least part of the time they are on the road, and to conduct more stringent background checks, among other measures.

Whatever may come of Cheh's legislation, UberX likely will hold onto its biggest advantage over D.C. cabs: cheaper prices. Even if metered cabs could lower their prices, many drivers may opt to keep their rates at current levels because of their higher overhead costs.

Higher overhead costs, you say? I wonder what could be causing those? We'll see whether San Francisco handles the influx better than D.C. San Francisco looks like they want to make it easier for everybody. D.C. looks like they want to try to make it harder for everybody. When thousands of consumers are willing to violate your city's regulations to stop doing business with you, the problem is clearly not them.

Below, ReasonTV on efforts to break D.C.'s taxi cartel: