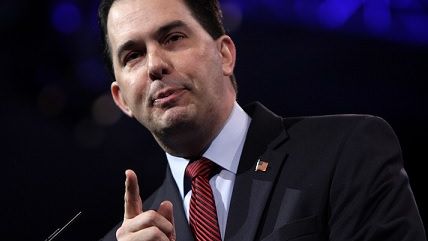 Wisconsin Gov. Scott Walker (R), in a tight race for re-election, released a 62 page plan for "Greater Prosperity for All." Among the proposals, as the Milwaukee Journal-Sentimental reported, is the tired old canard of drug testing recipients of food stamps and unemployment. In 2011 Florida passed a similar law, which was eventually ruled unconstitutional; 2.6 percent of recipients tested positive for narcotics, mostly marijuana and the effort cost more than it saved. Nevertheless, in the wake of the Florida law, by 2012 more than 20 states had similar bills introduced in their legislature.  And Florida wasn't the first place the idea to drug test welfare recipients gained currency.

The urge to police recipients of government aid is part of the conservative approach to the welfare state. As Shikha Dalmia noted last year, "the welfare state suits conservatives just fine. Its existence gives them an excuse to regulate individual choices. And it's their trump card for stopping liberty-oriented reforms they dislike.

Two months out from his re-election, Walker pulls out the "drug test welfare recipients" card. Will it pay off? The Democratic candidate, Mary Burke, hasn't said anything about marijuana one way or the other on the campaign trail and it's not mentioned on her website. Last year she insisted she was "open" to legalizing medical marijuana but it hasn't been a campaign issue.

Other parts of Walker's plan include lowering the total amount of time able-bodied people can receive food stamps and unemployment, and an income tax cut of an unspecified amount.

The vice president of the Arizona GOP, a state senator, resigned his party position this weekend after suggesting sterilization and drug testing for Medicaid recipients.