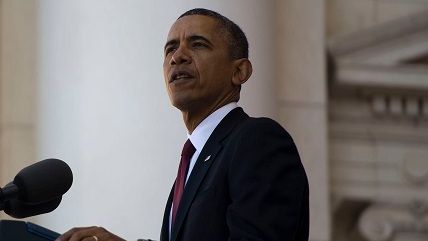 President Obama told the American people that he will escalate the U.S. bombing campaign against terrorist forces in both Iraq and Syria in order to "degrade and ultimately destroy the terrorist group known as ISIL."

"America will lead a broad coalition to roll back this terrorist threat," he said in his televised address.

The thrust of the new effort will consist of airstrikes against ISIS. Obama will not hesitate to bomb targets in Syria as well.

There will be no American ground forces involved in the conflict, according to the president. Nor will the U.S. cooperate with the Bashar al-Assad regime—instead, U.S. forces will support the efforts of the "moderate" Syrian rebels.

There are plenty of reasons for libertarians to be skeptical about this latest military adventure in the Middle East. The president did not seek Congressional approval and believes he already has all the authority he needs. Will that change if the president concludes that ground forces are indeed necessary? And though he cited the murders of James Foley and Steven Sotloff as justification for more airstrikes, he also promised to support Assad's non-ISIS opposition—a rebel group accused of cooperating with ISIS in Sotloff's murder.

In any case, here we go. Full speech here.