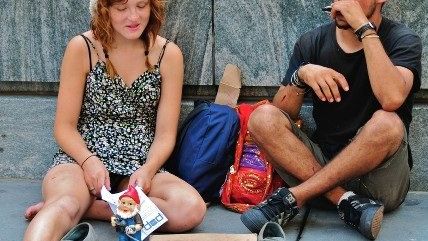 Until recently, a bad job market was nearly always bad news for political incumbents. Unemployed and anxious voters have a habit of throwing the bums out. But headed into the 2016 election season, one large demographic group is still likely to vote Democratic: millennials.

Which is weird, because when it comes to the labor market, it sucks to be young. To be sure, it has always been hard to enter the workforce during a recession. But this recession has not only been particularly severe; it has been made longer and deeper than necessary by the Obama administration's policies. Washington's burdensome regulations, "stimulus" spending, and health insurance mandates have given us a slow recovery, high uncertainty, and a pathetic job market, writes Veronique de Rugy.

So why aren't these kids more freaked out about their future? Why did the youth-driven Occupy Wall Street movement fizzle out instead of becoming the new normal? The July Reason-Rupe poll suggests one possibility: Millennials define themselves politically in cultural terms rather than economic terms. This aversion to economics may be a product of growing up in a time when the economic headlines have always been bad, according to de Rugy.